On News Year’s Day, in a state of post-celebrating delirium/hilarity, BF and I had a good ‘ole time talking about potential resolutions.

He and I have never been huge into resolving to change our lives at the start of the New Year, but it’s fun for us to invent crazy ideas of how we could spend the rest of the year.

And for better or for worse…this year, one of those ideas stuck.

It all started with BF trying to come up with some sort of fitness goals. Sometimes he’ll do this throughout the year, such as a number of miles to run in one month or something of that variety, but this time he dug a little deeper.

His idea was to do one push-up and one sit-up on January first, two push-ups and two sit-ups on January 2nd… and so on.

And just because he felt it was incomplete, he included a jumping-jack into the mix as well.

The things you learn when Google-image searching “funny jumping jack”. Also, this is true.

And because, you know, why not do one push-up, one sit-up, and one jumping jack… I decided to do it too. The next day, we went for our two of each.

I’m not really sure when I decided to join in on this venture, however we’ve just completed day 11 of Push-Up, Sit-Up, Jumping Jack…more fondly known as “PSJJ.” 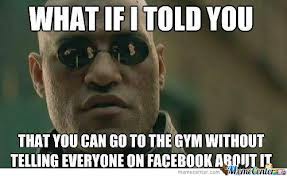 It was hilarious at first. Because seriously…who purposefully does only one or two of these? It’s still a little funny…but (and I think you can see where this is going) we’re beginning to realize that this idea is going to get really hard, really fast.

Not so funny then.

However, this wasn’t so much of a resolution as a, “let’s see how long we can do this for” type of thing.

At this point, it’s both amusing and do-able. Howeve,r I’m a little afraid that it’s not too long until we’re going to curse this idea and dread every day a little more. 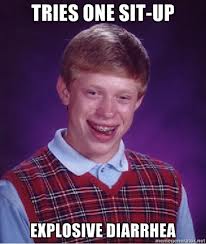 However, for two reasonably athletic and outrageously competitive people, I don’t really see us quitting as soon as we hit some scarier numbers.

In the meantime, it’s still funny and still a little fun to think of actually carrying this whole thing out.

And in case you’re wondering, there are official rules:

3) Exercises can be completed while in a class at the gym/during a gym workout. I.E: while not in the presence of the other participant…we’re all about honesty here.

5) Off days. (BF, we still need to discuss). I think potentially we may need to come up with some sort of allotted “off-days” for the sake of deathly illness, injury, or…ahem, marathons. HOWEVER, I think those off-days need to be earned by adding those missed PSJJs on other days.

Clearly, our hangover-induced idea has turned into a much more official endeavour, but it’s kind of fun.

Who knows, maybe this health-oriented idea will actually start to really supplement our strength.

So there you have it. PSJJ is now public, and open to anyone who wants to join on the bandwagon. There’s no spreadsheet, sign-up, or twitter handle…just honesty and sweat. If you did start now though, you’d need to go until January 11, 2014…just to get in the full year.

And now you have a glimpse into the thrilling lives of BF and myself. It’s a little embarrassing.

And in case you were super curious…my “real” resolution is to read a book a month in order to get my ass off the interwebs all the time. I know this is ridiculously easy for a lot of you…but for me, well, let’s just say I have a little more faith in PSJJ.