Okay, so I might have gotten a little overly critical in yesterday’s post in regards to the commercialization of running. The running industry has contributed so much information and research toward the improvement and accessibility of running, and many of the “rules” they’ve come up with are indeed very credible. My point was simply that you shouldn’t presume every new fact, product, and tip that comes out about running directly applies to you. Running is very individualistic (one of the reasons it’s great) and don’t immediately presume that you’re doing something wrong if “groundbreaking” research tells you so.

With that said, there are particular “running rules” that seem to apply to at least the majority of runners. For example, hydration and carbohydrates are two things that I think all runners can agree are must-haves. I’m constantly kind of laughing at myself and shaming myself for the things I think I do very right and very, very wrong in regards to these running “basics.” Truly, there are some things I don’t do stereotypically “right” that I believe has no impact on my progression as a runner. However, there is definitely room for improvement, which is why I’ve decided to do a little analysis of my good and bad habits, in conjunction with the “rules” of being a good runner. The grades I’ve awarded myself are what I believe the whole of the running industry would give me. 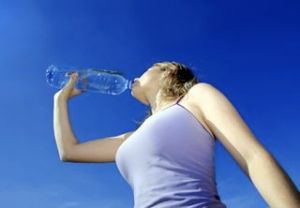 I always have the best intentions when it comes to hydrating properly. I carry a Camelback water bottle with me constantly, and I awkwardly ask public places to fill it as often as I can. However, I would say I don’t hydrate as often as should given my activity level. I think I’m hydration-proficient when it comes to the Average Person, however given the excess amounts of sweat I create during the day, I should probably be drinking more water—especially later in the day.

However, I really only ever drink water (and one cup of coffee in the morning), so at least my hydration is coming from the purest source.

Changes Necessary? Yes. I firmly believe that runners should pay a lot of attention to how hydrated they are. I know that above all other factors, if I’m dehydrated on a run it makes the most noticeable difference. 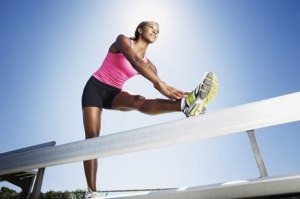 If the “importance of stretching” were limited to pre and post run, I would probably get more of a C in this category. Admittedly, I’m not stellar at stretching immediately after a run, and I hardly ever stretch beforehand. However, I’m a dedicated yogi, and I credit the 2-3 hours I spend a week on my mat toward my stretching grade. This is actually a debatable topic for runners; while many argue for the value of stretching, there are many intense distance runners who claim to never stretch (Dean Karnazes for example…although his “human” credibility is questionable). The science behind the importance of stretching is variable as well, so this is definitely an area where I’d argue to do what works best for you.

Changes Necessary? Not really, BUT that is very dependent on continuing to do things such as yoga and foam rolling. Additionally, BF and I take turns rolling each others’ calves with The Stick (remember that Friday “Favorite”?), which I think helps with our muscle relief. So, I would say my habits are working for me, but the measures I do take to remain stretched and loose must be maintained.

I have to say I’m proud of myself for this one. I never, ever used to think that anything other than running was a viable workout. I thought a sweat was wasted if it wasn’t spent on a run, so it definitely took me a while to really learn to appreciate (and love!) a cross-training routine. And truthfully, I was kind of forced to—when I got hurt almost a year ago (due to excessive running) cross training was my only exercise option for a solid three months. And I’m actually grateful for it, because now I not only enjoy other activities other than running, I definitely think they make me a stronger and smarter runner. I 100% believe spinning has helped my speed, swimming has helped my recovery and cardio strength, and yoga has helped quicken my muscle repair.

This is actually another debatable point in terms of “proper” running training. Many people vouch for it, however there is a large number of people who think the only way to be a better runner is to run, and that’s all. I definitely see both sides, and while there are days I’d much rather run than anything else—I know my body really thrives most when there’s variety in my workout routine.

Changes Necessary? Not right now. If there is a time when I’m really looking to amp up my training (either for increased speed or increased race length) then maybe I’ll need to tone down the cross-training, but for now I think that as long as I’m getting my marathon-prep miles in, there’s no reason to cut out the cross training.

So, I’ll leave the debate of what to fuel with for another discussion, but in general I would say that the grades above are pretty much how the running industry would rate my fueling abilities. If I have a long run in the morning, I’m better about pre-run fueling for sure, but for just an every-day run I normally only have a handful of cereal and a few sips of water. It could be better for sure, but it does work for me and I have a persnickety digestive system to begin with, so I don’t really care to experiment.

As I mentioned in Monday’s post, I’m really bad at fueling during my runs. Honestly, I’ve tried the whole gummies/gels/etc gunk, and all it does is make my stomach hurt. I wish they worked, and I think I might be able to condition myself to stomach them a bit better, but I really prefer a sports drink instead. That said, I only actually bring fuel on a run if it’s a really long run—another reason for my D grade.

As for post run re-fueling, I think I’m pretty good about the whole “carb-to-protien” ratio or whatever it is we’re supposed to do. I almost always eat within an hour of running, and I make sure that it’s something at least marginally substantial. I can really only credit my voracious appetite to my skills in this category, in that it only takes about 20 minutes after a run to set my appetite a-flame.

Oh, and in terms of calorie replacement after a long run—I have no issues there. See: My addiction to cookies.

Changes Necessary? Some. I would like to be a better mid-run fueler, and I think that as my marathon training increases, I’m not going to have a choice but to get used to the gummy energy thingers—unless I want to feel like total crap by the end. Also, I’ve started to get hungry during my runs more frequently, so I’m thinking I’m going to try adding something a little more substantial beforehand.

I am really, really trying to get better at this—and I think I am, but as I’ve said it’s not in my nature to intentionally take rest days. I know I justify my lack of rest days with cross-training… as in: well, I’m not running—therefore it’s okay. And actually, there are days where I’ll only do yoga or a light swim, but overall I would say I must be more programmed to completely let my body regroup and relax.

Changes Necessary? Yes, and it’s a work in progress—I promise!

So there you have it. Five very basic rules that I would say the majority of the running world agrees upon. I didn’t even get into shoe replacement, speed work, and proper training plans, because there’s way too much variety and—again—I don’t think there’s one right answer. I actually don’t believe there’s necessarily a “right” answer for the rules I’ve stated.

However, my goal is to show you that sure, there are some guidelines to this whole running thing, and as an active distance runner, I’m both sub par and exceptional for different ones. The point is that while I’ve acknowledged the areas I could improve upon, there are certain nuances that I don’t abide by and it’s no big deal. Not that my running career is scientific proof of anything (English major folks, and a liberal arts school one at that), BUT I hope that I’ve shown the importance of analyzing what works best for you.

So listen to the experts, read the studies, and buy the books, but remember that the most credible source of information is your own body. It knows better than anyone else what does and doesn’t work for you as a runner—and in the end that’s who you should be abiding by.

NOW YOU! What grades would you give yourself for these running “rules”?

2 thoughts on “My Running Report Card”