As I briefly mentioned at the end of my post last week, I—along with the rest of the green-and-beer loving Americans of the running world—ran a St. Paddy’s Day race this weekend. I didn’t spend a lot of time prefacing this week with a blog post full of goals and nerves, because this wasn’t really an A-race for me. In fact, I wasn’t even looking at  it so much as a race as a training run; a training run in which I would wear a bib and get to practice running in the race atmosphere.

My main goal was to stay at marathon goal pace (7:55-ish) for the entire race. I also wanted this pace to feel do-able—comfortable enough to cruise in, but quick enough to feel like effort. If this was accomplished, I was going to be happy.

The other goal I had going into this race was to really practice and hone-in my race brain. This included not going out too fast, conserving energy, ideally negative-splitting, and generally getting a good “race-day” feel.

One condition I had to accomplish before toeing the start line was to do a 7-mile “warm up” beforehand, in order to get my prescribed 20 miles in for the day. I was probably most nervous for this part. I knew on fresh legs, 7:55 miles wouldn’t be a problem. But after 7 miles and a questionable night of sleep beforehand, I felt a little less in control. Not to mention the fact that only two days before, I had an intense speed workout that pretty much kicked my confidence and butt to the curb.

Nevertheless, 5 am rang in on Saturday—and out I went for a slow 7 miles. I didn’t wear headphones (saved the jams for the actual race), and I focused on staying slow and in control. Before I knew it, an hour had passed, and I was back home changing clothes and scarfing down a banana and Picky Bar. 15 minutes later, and BF and I were on the road to Tacoma.

After a quick packet pick-up and finding the best race-day parking spot EVER, we leisurely rolled up to the start line, along with several other green-and-shamrock clad runners. I even managed to spot a few friends who were running—which is always fun. (Tacoma is the home of my alma mater—Logger for life!) 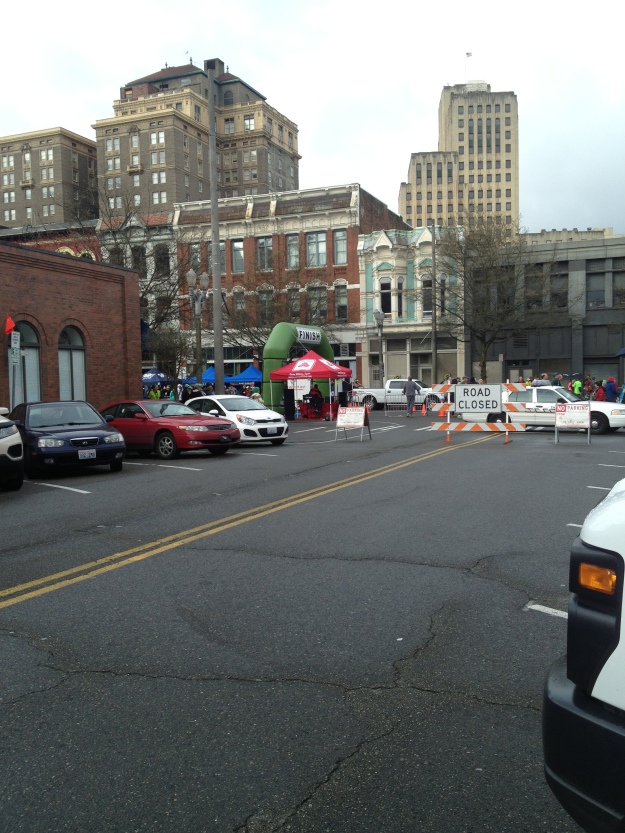 I kid you not…this is where we parked. High fives all around.

The gun went off right on time—and off we went!

The better part of the first mile was largely downhill, which kind of screwed up my “start slow” plan…but I wasn’t worried. A little padding time would help with the hilly section I knew would come up. I planned to settle into 7:55 in the second mile and cruise from there.

There was a lot of leap-frogging going on during the first few miles. I had a private chuckle to myself whenever I’d pass someone and they’d immediately sprint back ahead of me. I didn’t let it egg me on…and if anything, it was a good reminder of what happens when you waste too much energy early. “Even pacing…stick to your plan,” is what I kept telling myself.

After the first three miles, the course started along a long, flat stretch of waterfront that I have always loved running on. The last time I ran this route was during the Tacoma Marathon, so I was happy to reestablish a better relationship with the terrain.

I felt fantastic. 7:55 felt very in control and comfortable—and luckily at this point we had thinned out to the point where I didn’t have girls anxiously gunning to run by me. I knew I was probably the 20th woman or so, and while this little fact added a competitive glimmer to my brain, I didn’t let it take over my plan.

I kept cruising, enjoying the scenery and being in a race. I knew that miles 6-7-8 were going to be hillier, so I prepped myself to bust through those.

As the hillier, neighborhood miles approached, it started to rain. Not the worst thing in the world—a lot of the time rain feels nice in the middle of the race—but I did have a chafing concern.

And here’s where I potentially TMI, but it happens: My legs were already a little raw from how sweaty my Thursday workout was, and despite my better attempts at BodyGlide and bandaids…I knew that they’d be no match for wet shorts. No matter. If my biggest complaint was mild inner-thigh stinging, then I was doing good.

The hillier miles were a little tough, but really nothing too bad. I actually enjoyed the change of pace/terrain, and it was fun to bolt on the downhills. Around Mile 8, I took a couple Sport Beans and got a big surge of energy. I was excited to head back on the flat waterfront again and finish this thing.

I should also state at this point that I’d been consistently running down a couple girls for the first 9 miles. My technique would be to find a runner whose pace I liked and stick right behind them. This really helped simulate a good race feel, and I made sure (at least until mile 9ish) that they were within my goal-pace-range.

That’s when I came across green bow girl. This chick had—frankly—the prettiest stride I’ve ever seen (is that weird to say?), and she was holding an incredibly steady pace up ahead of me, and I decided she would be the next target. Once I caught her, I felt great and assumed we were right within my right time frame.

But, at this point—I knew my primarily goal would be accomplished, so I decided to have a little fun at the end.

So, green bow and I ran stride-for stride, me right behind her. I could tell she was into it though—so it turned into more of a joint effort than a caddy girl-race. The rain had let up at this point and it was time for a gut-out to the finish. I still didn’t feel like I was all-out though, which was incredibly encouraging. I was really pumped at the fact that a 7:40 pace after 17 miles of running for the day felt good.

With about 2 miles to go, an interesting twist in the plot developed: the half-marathon runners merged with both the 5k AND the 10k. The two races had started after the half, and although the runners of the two races were already done…the walkers were not.

So, despite the better efforts of the race officials to keep the lanes designated to walkers and runners, the last two miles was a weave-fest of the half-marathon runners and the 5 and 10k walkers. It was a bit frustrating, but I suppose it also kept things interesting. My iPod had also died at this point so it was fun to chime into the mid-race chatter.

I had passed green bow at this point, along with a few other girls. I knew they were hot on my trail, and in the final mile I decided to not let any of them pass me. It helped that we were all dodging people, so none of us could really see the others through the crowds.

With less than a half mile left, it was time to bust some booty. The only other thing I wanted to accomplish for the day was a strong finish, which I was set and ready for. That is…up until I remembered/realized that the finish was straight up a marginally steep hill. If the hill didn’t crush my sprinting-finish effort, then the corresponding people-dodging definitely did. It wasn’t pretty.

Check out the end there…NOT COOL.

But before I knew it, I crested the last ascent where we were siphoned off into a separate “half-marathoners” section (better late than never…I guess). I ran the last hundred yards or so to the finish line, tried my best to smile, and clicked my watch to stop.

My second fastest half-marathon time, a negative split, and on the tail end of a hard week and a 7-mile warm up.

I was pretty excited, to say the least. Good work Tacoma, you redeemed yourself.

I got my medal, a water bottle, and quickly got back to the finish line so I could see BF finish. I managed to see Lauren accomplish a huge half PR with a smile on her face which was just great, and before I knew it—there was BF, pulling in an awesome 1:54. Once again, I was marveled by his natural athleticism—he didn’t train for this race and had taken the entire week off beforehand. Seriously dude?

It was at this point that I saw the chafing damage on my leg. I was so distracted with race euphoria that I hadn’t realized just how much multiple patches of skin were stinging. Let’s just say there was blood on both my legs and my shorts…and the spot under my right arm that always gets trashed was nice a raw.

But things were still too exciting to care. We went to check out official times at the results booth, where I discovered that I’d won my age group! This has never really happened before, so it was quite the icing on the cake. I even got a blue ribbon!

I love my ribbon! It’s so pretty! It also says Bud Light on it…so, thanks for that too? Also I spy a green booty-booty-booty photo-bomb behind me.

This was a good day. It was a fun race, a strong run, and exactly the confidence builder I needed going into this second part of training.

While the AG placing definitely feels good and adds a layer of encouragement, it’s really the feeling of strength I felt the whole time that made this race for me.

We finished off the morning the only way there is to after lots of miles and sweat:

fork added for scale purposes..so much pancake, so much glorious pancake.

And that photo pretty much summarizes the rest of the day. Lots of food and rest was essentially all I could muster, but it was all with a smile on my face.

I’m feeling good about Eugene right now, and I don’t think I’ve really vocalized that feeling yet. I know there are bound to be a few more kinks to work out and per usual—bad runs will happen. But if Saturday is any indication, I think my training is headed in the right direction, and I’m getting more excited for my next 26.2 endeavor.