Here it is, the ever popular “My Year in Running” post that’s been strewn about the blogging world these past few weeks. Yes, it’s just as cliché as resolutions and pictures of oatmeal, but I figured I’d partake.

I pieced together my “categories” for the year from a variety of sources, please feel free to use.

Not perfect. Not awful. Not necessarily everything I wanted.

But in many ways, I feel like I hit both ends of the running spectrum this year. And by that, I mean I barrelled head-first into both the lowest of lows and highest of highs in my running—all within the course of a single year.

Fortunately, the highs have been happening more frequently, and it seems as if I was able to take a little more from the low points that simply a battered body and bruised ego.

Let’s have a looksie back in time though:

I actually had a hard time answering this question, which makes me smile. The tail end of this year has been full of some good racing in terms of PRs and experiences. However, at the end of it all, I think Chicago takes the “best race” cake for the year. Among an assortment of reasons I loved this race (the crowds, the course, the atmosphere, etc.) I truly felt that it was the best executed race I’ve ever run, considering the circumstances. I went in without expectations and without a goal time, but merely to run well, finish well, and have fun. All those goals were met, along with a new marathon PR and a feeling that I am capable of going back into battle with the marathon beast.

And speaking of that beast… 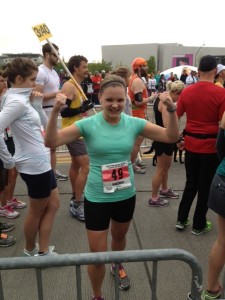 I mean, there isn’t much explanation needed. If for some reason you’ve been spared the details of this race, go ahead and click the link above. Just a lot of misery around this one, I have a hard time keeping this on my marathon list. I learned a lot of lessons here, which I suppose is a good thing, and another good thing is that I will (hopefully) never hit this low of a low again during a marathon.

PSA: Don’t go for a big reach goal on a hard course. And if you do, don’t be stupid like me and refuse to slow down/stop if your body’s given up.

I still have a bit of resentment about this race, but the best thing about bad experiences is that sometimes they teach us more than the good ones. 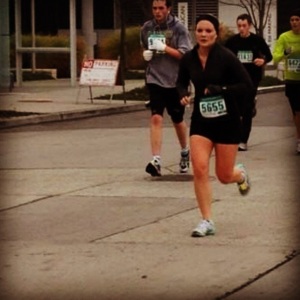 In a very unexpected move, I beat my previous half-marathon time by over 5 minutes—which was both very surprising and very encouraging. I still have a hard time believing that this race actually happened and how in the world I was able to hold that a sub 8 pace for longer than I ever have before.

Now, I’m on the cusp of one final half before the year is out, and I’m wondering if I should hang my hat on my 1:40 finish, or dig a little deeper.

I love a lot of my runs, and I don’t have a very keen memory for the specifics, however there was one run that comes to mind that was somewhat exceptional.

And ironically, it was in Tacoma, training for the aforementioned dreadful TCM.

I went down to Tacoma for a 20 miler to get a feel for the hills that would come into play on race day. While the run itself may not have exactly prepped me for what was the come, it was a perfect day of running. Challening, scenic, encouraging, and done at the tail end of knee bursitis—with not a pain to be felt the whole time.

I love the big 20 milers in marathon training, and this one was especially encouraging.

Here is where I resurrect my goal from way back when to run 2012 miles this year. Admittedly, I got lazy, stopped keeping track, and it became too hard to recount. Also, I got hurt a few times which derailed my progress. If I were to guesstimate, I think I will probably finish off the year within the 1800 range or so. Maybe next year…I have started being better about my training log!

I learned a lot this year. About running, about racing, about resting. I do think I’m finally coming to terms with the balancing act of pushing my limits and reeling in the reigns.

I used to think that you were either one or the other– a champion or a slug. But I’ve come to realize that my running and my competitive spirit don’t make me any better or worse than any “normal” person out there. And the days where I’d rather stay in pajamas and alternate between napping and watching tv don’t make me any less of an athlete. The two can coexist…and in fact, they need each other in order to stay live.

The other most important thing I think I’ve learned, which is what I’ll be carrying big time into 2013, is that we are wholly and entirely in control of our capabilities. I used to think that there was a cap to success—a certain quota, if you will. Once that milestone or limitation was filled, that would be the end of it.

However, I’m realizing that there isn’t a finite number of success available. Just because those people have run BQs or have already mastered 50ks doesn’t mean that there’s any less potential available for anyone else who wants those things. An achievement isn’t any less significant or impressive if someone else has already completed it. Good for them, yea, but remember…good for YOU.

It’s all relative, and once we’re able to bat away comparison and take a look at our own playbook, we’ll realize that even the most wild of dreams can be ours.

And wild dreams I do have…starting with a very focused, disciplined BQ-or-Bust journey in the beginning of February.

Now it’s your turn! Best and Worst Races? Biggest PR? Proudest Accomplishment? How did your 2012 look?