It would be a big fat lie to be as bubbly and glitter-filled as I originally thought I was going to be when writing this post. I did have a spectacular long run on the marathon course last Saturday, and everything in life is generally going great, but right now I’m really just feeling tired and spacey.

I haven’t had a good night’s sleep since last Friday night, and although I’m normally fine on less sleep, I think it’s catching up with me. Heavy mileage weeks + waking up every two hours= Grog Fest 2012. So while I certainly have plenty to do work wise and in my own life, all I really want to do is eat Cadbury Mini Eggs while lying on the couch alternating between Friends reruns and napping.

Also, if you are worried about my Cadbury Mini Egg supply, have no fear. The Easter Bunny, who somewhat resembles a strapping, brown-haired 23 year old boy, replenished my supply with TWO big bags. I know you were worried, so no stress there.

So, although I’m wishing that all my clothes would magically turn into sweatshirts and yoga pants, I’ll do my best to recap some of the real-person-good-life happenings as of late.

I know that recapping every. single. weekend long run is the opposite of interesting, and I’ve tried to tone down the detailing recently. BUT Saturday’s excursion down to Tacoma was just too good not to share, and it gave me some great insight into the value of “preview runs.”

Per the advice of a former college friend of mine, I mapped out a 20 mile run through Tacoma that would roughly take me on 14ish miles of the marathon course. The run included parts of Tacoma that I’d never run through before, as well as some of my favorite old spots to trot through. I was really excited to see the spots that I always used to pass by on runs, including a jaunt by my alma mater as well. 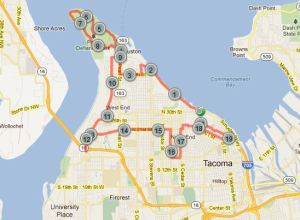 This was my run. It was very long.

It was the perfect setup for a long run: I was well fueled, I had a handheld bottle filled with Nuun, the sky was completely clear and sunny, and no matter what I was ending with an oatmeal breakfast with a good friend. Ideal situation, and the run definitely delivered.

There was quite frankly not one forgiving part of this self-designed course. It was rolling hills nearly the entire time, including a few pretty brutal climbs—however this element was key in terms of actual race prep. It felt great to be running in spots that I knew I would see on marathon day, and I liked thinking that I’d be familiar with specific sections that would be harder or easier than others. I practiced an easy pace on the uphills, an aggressive pace on the downhills, and finishing with a strong kick. The last mile or so was the only all downhill part of the run, which was a great simulation for how the actual race ends. Although it’s easy to think that a downhill finish means the last few miles will be easy, I think it’s surprising to see how much the downhill impact actually affects really tired legs.

I finished 20.3 miles in 2:53, which translates roughly to 8:30 average pace. I’ll take it—especially with those monster hills.

Also, NO KNEE PAIN! I love Aleve, and I also love that my knee has decided to start cooperating, specifically on mega runs like this.

An all-around win in my book.

Obviously, this was a necessary end to the day.

Easter Sunday was marginally uneventful, but it was fun. The best part was awaking to an egg hunt that BF designed for me. Both of us get a kick out of child activities as adults, and so I think sending his girlfriend on a search for plastic eggs throughout our tiny house was probably more enjoyable for him than it was for me.

Just kidding babe, I loved it.

Here are some action shots of the hunt: 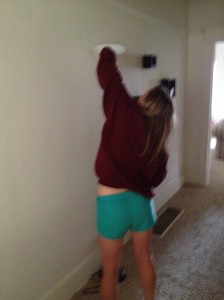 NOT FAIR. Hiding eggs out of short-person reach is discrimination. 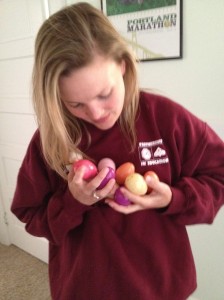 I haz eggz. And an XL sweatshirt that is the epitome of flattering.

Once I cleaned myself out of my somewhat-hungover-disheveled-Easter-morning state, it was time for some chocolate. Because on Easter, you obviously need to consume about 10 servings worth of candy before you eat any actual breakfast. 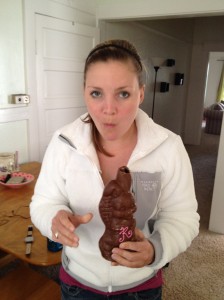 This is a picture of me eating.

Oh and by “cleaned up,” I mean put my hair in a pony tail and put on mascara. Again with the female habits, I really need a beautician or a babysitter.

Also, here are our baskets. I’m a little afraid for the amount of candy we have in the house…because it’s easily equivalent to at least one isle at the grocery store. My teeth are scared for their lives.

What's that Target? You ran out of candy? Oh, that's because we have it all. Also, cookie monster is appropriate for Easter, obviously.

After a midday nap and lazing around in a candy coma, I finally managed to go on a 7 mile recovery run, done at a perfectly slow pace. I got to see all the families out for a sunny Easter beach stroll, along with all the other “mall people” that show up whenever the sun comes out in Seattle. People watching makes running go by so much faster, and no matter how many “WTF are you doing why would you be running ever?” looks I get from strangers (more than you’d think), I will still give them a huge cheese ball smile in return.

You will witness my sweat and you will LIKE IT people.

And, on one final note…because the fluidity of this post is just about Pulitzer worthy…I give you a look at how dogs make me SO EFFING AWKWARD. Remember how I take pictures of random dogs? Yea, so yesterday this happened.

Oh... and yes, you are looking right into my camera.

I blame BF for this. He loves Newfoundland dogs more than anything in the world, so obviously when I saw this guy on a stroll I needed to attempt to capture it in photo form. But guess what Robyn? Leaning across your car holding your phone up and driving slowly by people will PROBABLY MAKE THEM NOTICE YOU. I played it really cool when I realized the man saw the whole photo thing go down, and by “really cool” I mean I immediately held my phone up acting like I was trying to get reception. We both knew what happened though. Don’t worry nice newfie-owning man, I really only care about having a photo of your dog.

So that’s all. Thanks for listening to my ramblings, as well as my apathy toward the world that has taken over my mood these past few days. And actually, writing all this down has helped remove me a bit from my slump. I’m still going to eat all the Mini Eggs though and feel super embarrassed about the unbelievably low production level of my HTC relay application. I’m really glad I applied, and I really really hope I get in, but for real…there are some stellar videos out there, which you should probably check out, and I think you’ll realize why I’m about 5 minutes away from enrolling in some kind of intro to movie making classes.