Mother Nature reminded us this week that while the flowers might be blooming and the grass is getting greener, winter’s not quite over yet. Throughout the week, it was pretty rainy and gloomy and everything from the foothills to the 14ers received a solid covering of snow. As anyone here will tell you though, “We need the moisture,” and it couldn’t be more true. Luckily, training still went pretty much as planned. I’m getting excited though for more shorts-and-tee shirts only runs!

Back at it with the Golden girls! We did the standard jaunt up and down Lookout, and not one, not two, but all three of us had to use the bathroom at some point. Happy Monday? I always enjoy starting the week off with this crew and this run, but I also didn’t sleep well at all the night before (ugh, again), so the rest of the day was kind of miserable. I felt like I was getting feverish all day and even had two coworkers tell me I looked clammy/pale. Compliments, I’m sure. No idea what happened there, but maybe I’m getting too old for early mornings following short nights.

I hadn’t actually done my standard 7-mile Wash Park loop in a long time, and I was happy on Tuesday to indulge in a super relaxed run after sleeping in a little. While nearly the entirety of Denver hangs out at this park on the weekends, on the weekdays in the early morning I like to think it belongs to the runners (and walkers). There’s a lot of “regulars” out there and we all kind of recognize/know one another; it’s like a quiet, comforting little active community. 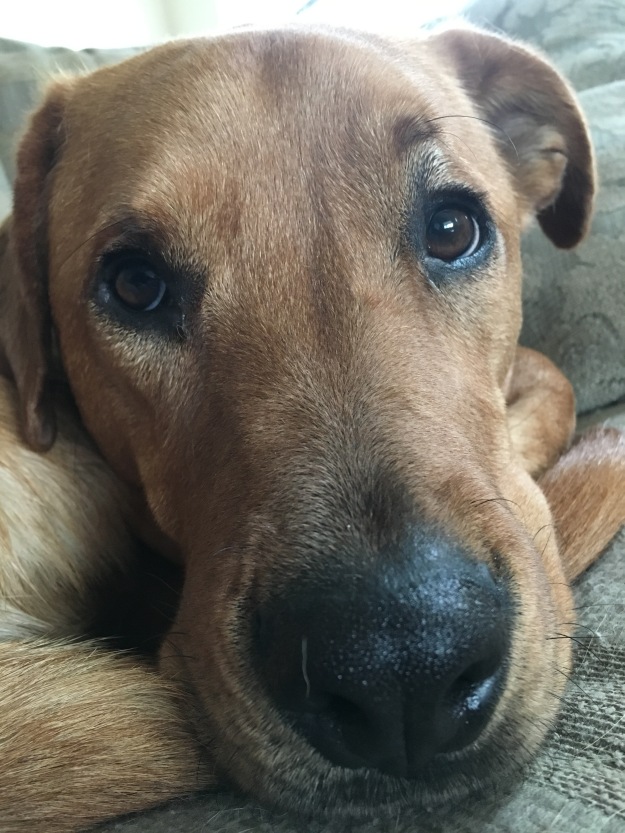 Mommy it also belongs to doggies!

Clovers again! At the end of every month, we run a course of stairs and straightaways at November Project and everyone is supposed to count their laps and try to beat their previous PR. It’s one of the best NP days of the month as everyone is super energetic and encouraging, plus it’s our hardest and best workout.

On Wednesday, my goal was to get over 17 clovers. My PR is something like 17.3, but considering that it was kind of wet out and I’ve only run over 17 three or so times, it felt like a good goal. I slowly ran the two miles there as a warm-up, and when I got there I was surprised at just how much the prospect of rain had scared people away. It was a small group! This is actually a good thing for clovers, because it makes it easier to navigate around the tight turns. Anyway, off we went and I was feeling great! I felt relaxed but also really strong, and I was actually thinking early on that I might be able to pull out a real PR. I was cheering on people and knocking out laps one after another and on one 90 degree turn…splat! I slipped on the wet brick and took a pretty decent fall, landing first on my elbow and scrapping up my knee. A few people stopped around me (I think it looked worse than it was…) and after a minute or so of assessing that there wasn’t any permanent damage, I continued on. I remained a little more cautious about my turns throughout the rest of the workout (two other people fell too!), but as we approached the end and I realized that I was nearly at 17 clovers and I’d lost a minute when I fell, I was kinda pissed. It felt like a wasted opportunity considering how good I’d been feeling beforehand, but…safety first. I finished with one section of stairs short of 17 clovers, and later on realized we’d only been allotted 33:30 of the normal 35:00 time window. Dang. Next time I’ll be ready to bust a move! 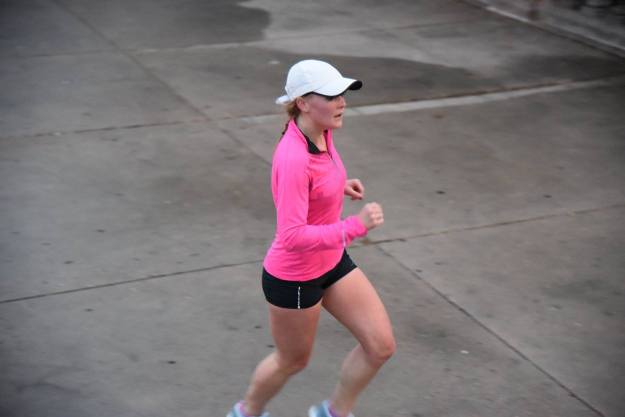 My elbow pain lingered the longest following that fall, in fact I can still feel it a tad 4 days later, but ultimately I got lucky. 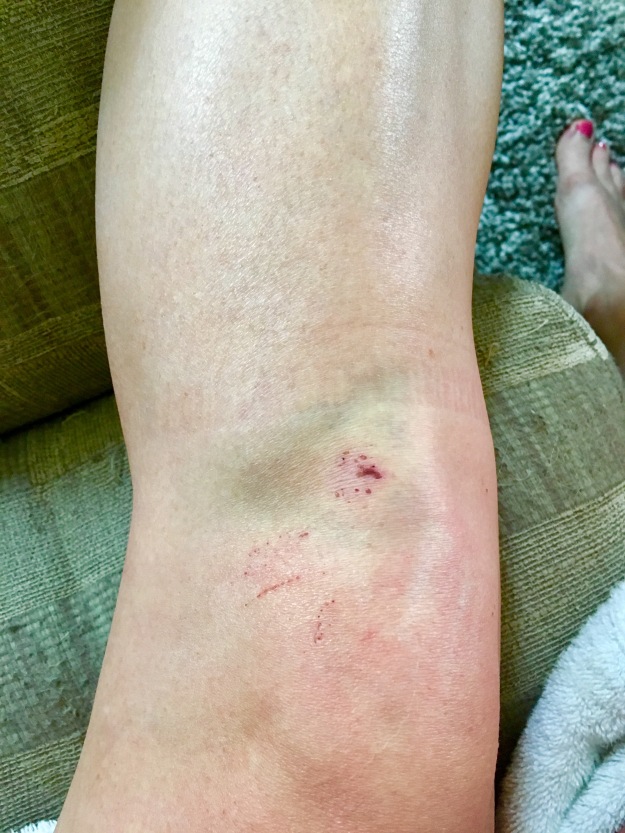 Knees are weird looking. This is from Saturday.

I decided after work to double up on the day and take Mona out on a little run. This went better than the nightmare of a run we had the week beforehand, but man…my stomach is not into running in the afternoon. Wearing the hands-free leash around my midsection doesn’t help anything out either, so I might need to be a little more strategic in planning my lunches on days where I do these afternoon jogs. It was nice and slow though, and it’s a good way to get in some shake out miles without a lot of wear-and-tear.

I really, really wanted to go to PlayGldn, but it had been several days of running in a row and I was ready to sleep in. I had intentions to go to yoga but instead just did a long walk with the dog instead after work. Real dog > downward dog.

Adam and I decided to take Friday off work (like, three weeks ago) in order to have some scheduled time to hang out together. I’d been looking forward to our day off for a long time and obviously scheduled a “group” run for the two of us to get everything started. Unfortunately, Adam really wasn’t feeling great on Friday morning, but he muscled through and we ended up taking the whole run pretty easy for both of us. Fortunately for me, this meant that the 8 miles weren’t especially taxing on my body and throughout the rest of the day I had kind of forgotten I’d run that morning. That’s probably the way recovery running is supposed to go, eh? Anyway, the better parts of the day included a long delicious breakfast and a long delicious (?) trip to REI where we were both patient enough to leave with new trail running shoes that should be good for both mountains and smooth single track. 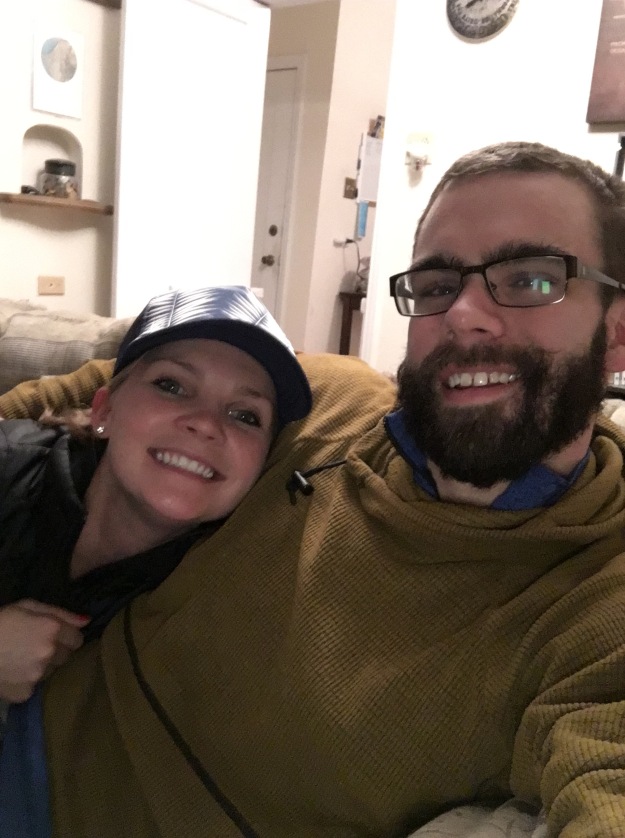 Marriage real-talk: when a selfie on the couch together is an accurate description of “quality time.”

I had been watching the Saturday weather like a hawk all day Friday and didnt’ really know if I’d be able to do my long run. It had sprinkled rain all day Friday, and it was supposed to turn into consistent snow throughout the night and through Saturday morning. I was really hoping to run long on Saturday instead of Sunday, but before I went to bed on Friday night I decided I’d need to make a game time decision upon conditions in the morning. I naturally woke up around 6:30 on Saturday morning feeling very refreshed, peeked out the window and…no snow! There was a bit of precipitation in the air, very Seattle-ish in fact, and I quickly made the decision to go for it. I took my time a little waking up, drinking coffee, and outfit planning – all of which got me in the long run mode. I haven’t done a long run alone in a long time actually, and while I missed my crew I was actually excited for a solo effort along with some tunes.

I headed for the Highline Canal trail and the plan was to do a second-half progression. I wanted the first half to feel easy and consistent and to make it hurt in the second half by gradually cutting down my pace every mile. I’ve never done this workout during a long run before, but in my limited experience with progression runs it’s important to be very patient. Go too fast one mile, then it’s going to be even harder to go faster the next mile, on and on. The point of the progression is to practice accelerating on tired legs, which is really good prep for race day, or you know…so I’ve read :).

Anyway, off I went on the easy miles with my earbuds in (throwback!) and I felt fantastic. It was 34 degrees when I started which is actually my ideal running temperature, assuming I’m dressed correctly. I was clipping off very even 7:55s and feeling like I was holding back a lot, which was encouraging. I wasn’t paying a ton of attention to my watch during the first half but every time I glanced at it I had to slow down to save some steam for the second part. I was feeling great though and kept picturing running into and striking up a conversation with one of the Broncos’ players who live in the area (okay, mostly just Peyton Manning). Alas, only a bunch of regular rich people :(.

I stopped briefly at my halfway point and calculated (in my head) how I ought to go about my progression miles. Since I had 8 of them to do, I couldn’t get too ambitious right away, so I decided that shaving off 5-6 seconds per mile would be perfect and land me right above 7:00/mile by the end. I switched the screen-face on my watch to show lap pace so I could keep close tabs on my speed, and off I went with a fresh Pandora station blasting (Pitch Perfect radio, FWIW). Right off the bat, I had to keep reeling myself in pace-wise, which ended up being the trend almost every mile. Stay patient, stay patient. This workout got a little scarier every mile, which was actually kind of entertaining. One mile would beep on my watch and it was time to kick it up, but just a little bit. Overall, it was a great practice in control and making small adjustments, as well as staying in the current mile. Forewarning: this required a lot of watch stalking and like I said to Julia later that day, it’s actually a good workout to do by yourself. I’m really happy with how the progression miles went, and I was definitely fighting for those two at the end:

One cool-down mile and I was toasted, which was exactly the goal. Admittedly, it was a little intimidating to think that the ending pace of that progression is where I’d like to be half-marathon pace wise (comfortably…), but this was also supposed to be a tired leg, race-simulation situation at the end of a 50+ mile week. Calling it a success.

So this was a braid at one point.

I slept in for real today, took Mona on a big park loop and eventually found myself indulging in a Core Power class. I don’t go to CP regularly because of cost and general time availability, but I do enjoy it on the off chance I decide to go. My hips and hamstrings certainly appreciated the love, and it was a super sweaty and satisfying class overall. Good Sunday!

Highs: I was able to run over 50 miles including two non-running days and a lot of slower miles, which meant that I didn’t feel overly exhausted at the end of the week. My two workouts this week were clovers and my long run, and while clovers didn’t go exactly as planned, I felt pretty fit during both harder sessions.

Also! I was way better about foam rolling and stretching at night this week, which I think were really helpful.

Lows: My sleep has been relatively poor recently, which is really counterproductive to training and my overall demeanor (I’m a mean tired person…).