Hello! A blog post! I wish I could insert an amusing gif to hyperbolize just how shocking my publication of a post is nowadays, however my skills with iOS 10 (not actually skills) don’t translate to my ability to insert media into a blog. Womp womp.

Anyway, I managed to run a quality (for me) race last weekend, and the suggestion was made to blog about it, so here I am.

The 5k has been a confounding and alluring distance to me over the past 4 years or so. It speaks to my former sprinter-self in terms of the pain-train, but it also involves some endurance strength in order to not entirely implode. The hybrid of the two, I’ve found, has worked well with my small set of skills, and I’ve managed to slowly but surely shave off time each time I’ve raced the distance.

Last year, following a very surprising 20:17 finish in the spring, I realized going under 20 minutes was likely within my reach if I put in a little work. However, given my tendency to train for distances much further than 3.1 miles, I always had an excuse to never sign up for a 5k (long runs, mountain climbs, blah blah blah). However, the desire to try and go under 20 minutes was still there in my head, but admittedly…it scared me. That’s a 6:25ish pace, which I never ever run unless it’s for some kind of interval. I’ve become so adapted to practicing “race pace” with the half and the full that the thought of going out into unknown territory was horrifying.

You never know until you try though, right? So, in November last year, I signed up for a local race at City Park. It was flat, it would be cold (my favorite) and I’d get a super-fast pacer, NP co-leader Matthew! Unfortunately, my wish for cold weather went a bit too far; it was under 20 degrees at the start and the roads were dusted with snow/ice. Nevertheless, Matthew and I went for it and after a heaving effort finished in 20:07. So close! A new PR, but going under 20 was still a to-do list item.

Obviously, it took me until last weekend to sign up for another 5k (see: Boston Marathon training and being in the mountains every weekend), but I felt good about going for it! Long, slow trail running and 14er climbing oddly lends itself well to road speed, and if you add in the couple of workouts I’d done recently, I felt pretty good about my chances. I picked a very flat, very small, nearby race that was exactly 3.1 miles (hey…you have to check that stuff sometimes!) and would offer me a great shot. Ready for my 19:xx!

The weekend before the race, we spent 4 days/3 nights camping in the Chicago Basin and hiking every day. Fast forward a few days to the middle of the week, and I was an absolute train wreck, physcially. I had the worst run I’ve had all year (quite literally), my body chemistry was all f’ed up (some kind of electrolyte/dehydration issue), and I generally just felt awful. Running sounded terrible, let alone running a super-fast pace for 20 minutes. So, I shut everything down; I took two rest days, slept a lot, drank a lot of water, ate a lot of food, and tried to will myself back into fighting shape. Granted, this was all only over the course of a few days – but I had a race to PR! This mini-taper was easily the best thing I could have done for myself, though, since I woke up Saturday morning with a fire in my belly.

Geezum, how’s that for a 5k intro? Get on with it!

As stated, this was a small race (like, 150 people small) so I knew the whole bib-retrieval/parking/warm-up process would be a cinch. Sure enough, it was easy-peasy, and I was off on a slow, 20-minute warm up about half an hour before the start time. As I finished up and got back to the start area – who should be standing there but JULIA! Sneaky little thing surprised me to come and cheer! At a 5k! What a gal, right? She knew the stakes, and although she was worried her presence would make me nervous, it was actually really encouraging. Let’s just say if races were a stage, I’m someone who thrives with an audience. Call me a diva, whatever. Anyway, I did two strides (whoops) and it was go time.

I lined up right up front at the start, since a quick peak at last year’s results would indicate that I could be fighting for a first-place female finish. Kind of exciting, mostly intimidating, but I went with it. The “gun” went off (don’t really remember if there was a gun) and the challenge was on! 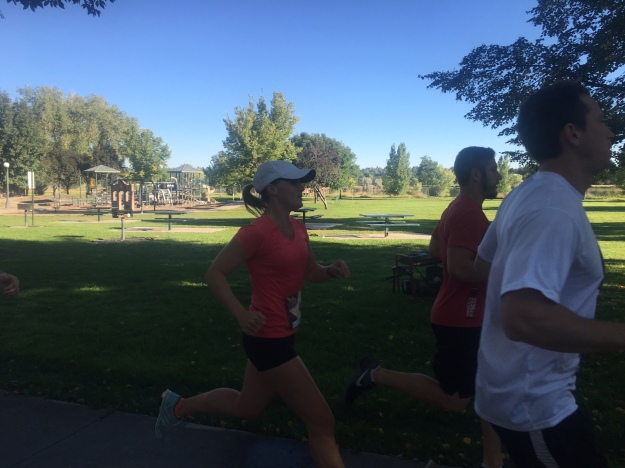 My strategy for this long-last sub-20 attempt was the exact opposite of every other race I run: go out fast, run my first mile the fastest, and try and hold on. I’ve found that it’s really hard to make up time in the 5k, but it’s easy to bank time in the beginning. Plus, the race is so short that crashing and burning at the end is somewhat short-lived – so why not make it interesting? So, that’s just what I did. About five men and myself all hurried up to the front and quickly we spread out in a nice even distribution. I was third and realized I’d be running my very own race the whole time – no people to draft off or to split the pace with. Alrighty then! We were running on a bike path the entire time, which is perhaps my least favorite surface to run on, but I chose to think of it like a track instead, which is one of my preferred surfaces to run on 🙂

My first mile buzzed seemingly right after the race started: 6:07. Whoaaa there. Pretty certain that’s the second fastest mile I’ve ever (formally) run, and while it was a little quicker than expected – it followed my race plan perfectly. In the 5k, I try really hard to focus on one mile at a time, which is way easier in a 3 mile race than a 26.2 mile one, so I was onto mile 2. 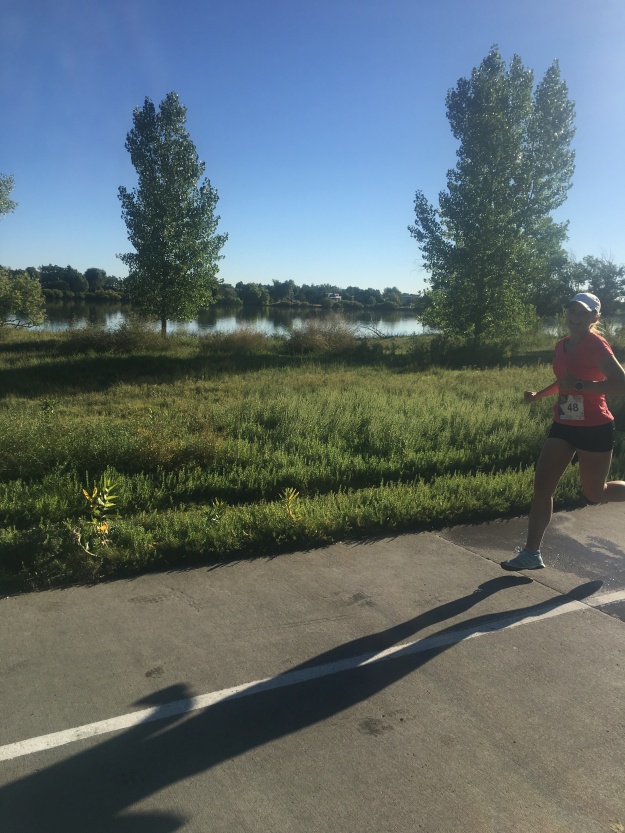 Hi Julia! Photos at the beginning of 5ks=smiles. Also, someone please remind me to work on my pronating.

I was still in third place overall behind two men, and while I was encouraged by this, I was much more focused at the task at hand: get to that line before the clock hits 20! I had to run through a giant sprinkler at some point during this mile which was a bit alarming but a nice distraction. We came up to a 180 turn on the path which rerouted us on a different part of the loop, meaning I got to see exactly where I was in terms of contention. I made the turn, and saw one guy and one woman behind me, maybe 30 seconds or so. It was something I paid moderate attention to, but I knew if I didn’t entirely explode I’d have a good podium shot.

Mile 2 FINALLY clicked off, 6:17. Somewhat better than expected! I knew I’d banked enough time to get in under my goal assuming I could hold on, but because math is hard and 5ks are harder, I had no sense of what the final 1.1 needed to clock. At this point, it was the “hang on for dear life” portion of 5ks that always rears its ugly head. But, with less than a mile to go I was able to remember my mantra and my big shiny sub-20 goal that was waiting for me if I wanted it.

Mantras have always helped me, and after being so inspired by Jenny Simpson in her Olympic performance, I chose something awesome that she’s said about racing:

I love that! The focus is so much more about having confidence in what you know to be true rather than extending onself into the unknown. I felt very sure that this goal of mine was achievable, and when I found myself hurting (which I was), it was an inspiring reminder to know, from the get-go, I could do it.

And all at once, there was Adam! And Julia! And mile 3 (6:33). Both of them were running behind me shouting super encouraging things, but my vision was tunneled – get to that finish line! 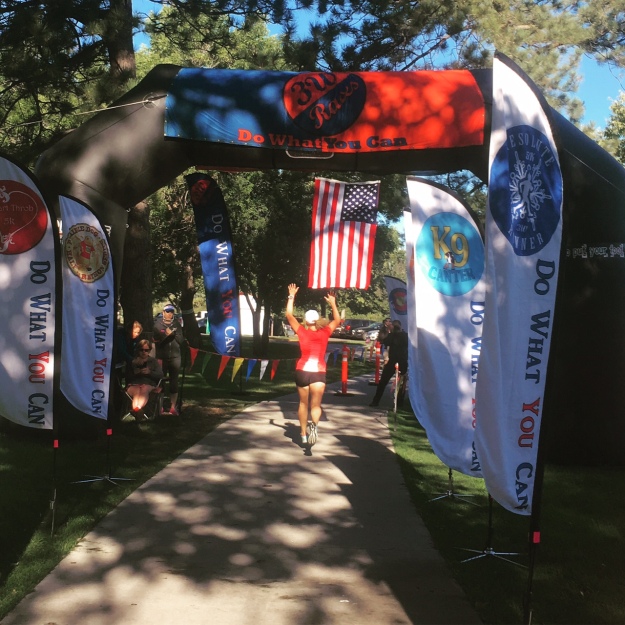 Bada boom, bada bing – there it was. I raised my arms in the air (I don’t know why…it felt right), clicked my watch, and basically stopped dead in my tracks to put my hands on my knees and regal myself after all that.

I’d been so focused on simply moving the clock under 20 minutes, I never expected to drop even lower into the 19s. I was pumped! And perhaps the most surprising part of all…I actually felt pretty great?! The last 1.3 or so was a bit of a suffer, but I’ve never run a 5k where my lungs and legs felt so good afterwards (one that I was actually racing, at least). The cherries on top were 1st overall female and 3rd overall finisher, which is definitely a first for me! 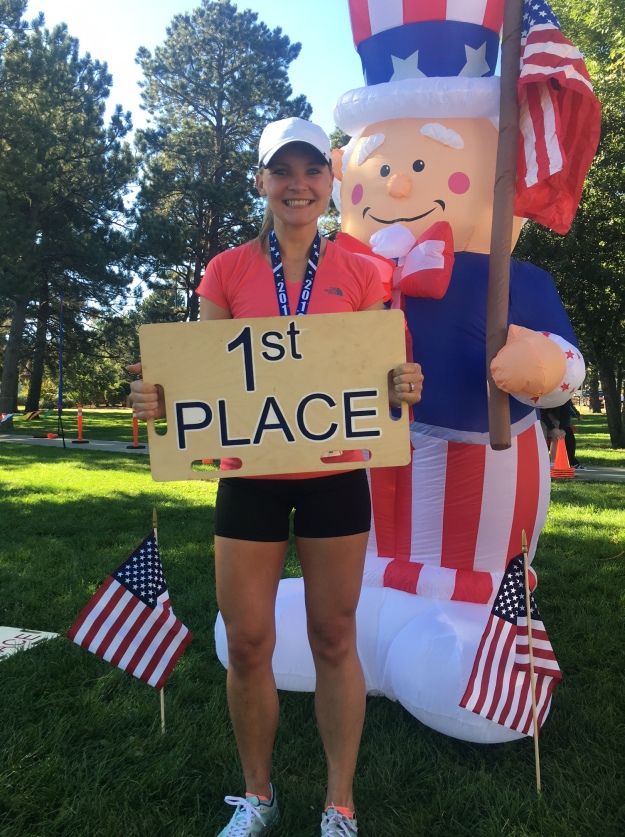 This race was unbelievably encouraging and satisfying. Although I’d classify myself as a long-distance runner foremost, I really do love these shorter races, and it felt so good to work toward a scary goal and finally check the box next to it. Add having some of my favorite people there and it was one heck of a perfect morning. I’m planning on hanging my hat on that 5k for the time being, but I’m excited to see how this can translate toward the Rock-n-Roll half next month and other upcoming races.

Finally, I’d really like to stand on a soapbox for a minute and advocate for the 5k, no matter your preferred distance. The race gets a sophomoric rep because it’s tied to being a beginner distance, however it’s truly a great challenge and change-of-pace (literally) from the sluggish nature of long-distances. It’s good for your legs to move fast, and it’s such a good feeling to finish a race and not need to recover for a week afterward. Not to mention they’re cheaper, more ample in options, and much more fun than doing a speed workout by yourself. Read this article if you’re not convinced. The 5k is freaking awesome.

Thanks for reading to those of you still out there. I know this was a verbose post about a race that was super short in length, but really I just like the opportunity to ramble sometimes in this space. I might not be here often, but I did renew my domain registration, so I’ll still be around every once in a while.