There are a whole range of topics that I want to blog about right now.

“Want” being the operative word in that sentence, since in the past few months I’ve admittedly not been “wanting” to blog about much of anything. But, somehow, through all that’s been going on and through all the inevitable life-examination that happens at the end of the year, I’ve found myself anxious to put my hands on the keys.

Since it’s kind of necessary to do some updating, before I dive into all these “want” topics I’ll catch you up-to-speed on what’s been happening in life since I last wrote.

The most important update I have is that after a month of failing health and general misery, I’m on a definite upswing! Fortunately, the medication my doctor prescribed seems to have worked magically with my unhappy gut, and I’ve been on the mend for the past two weeks or so. It was pretty remarkable how quickly I went from a nearly bed-ridden existence to feeling somewhat like myself again. It was night and day, really, and I feel really lucky especially since this particular medication doesn’t always work on everyone. That, and since there’s still plenty of unknowns about Crohn’s, there wasn’t really a way to predict just how long my flare up would last.

Four shots, two in each leg. I get to do these myself now…fun stuff.

So, the short and long of it: I’m so much better than I was just a few weeks ago, and although I’m still experiencing some symptoms and won’t be eating raw vegetables anytime soon…I think it’s safe to say I’m nearing the other side of this flare up.

I’m so very thankful for the progressive return of my health, and I’m hoping that whatever started working continues to do so. 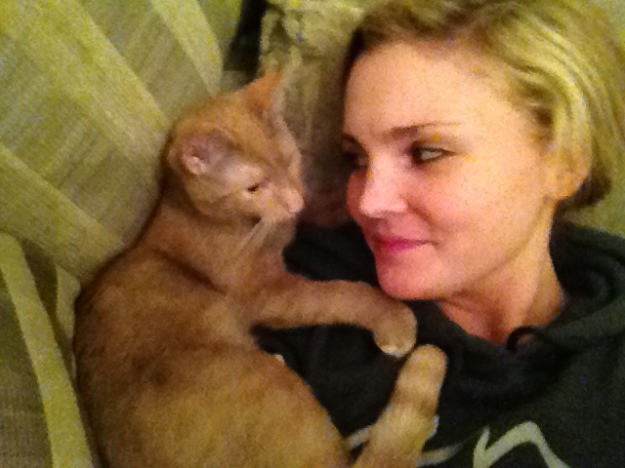 This was my position of choice for several weeks. Little J was close by though.

While I was a self-proclaimed Grinch in my last post, luckily my symptom relief coincided nicely with Christmas Eve and Day. I was able to celebrate a wonderful Christmas, and despite not being able to enjoy a lot of the season, I feel like I got a good fill. I spent Christmas in Colorado with my family, and we’ve since traversed the country (yes, I was able to go on the road trip!) and are currently spending New Year’s in Pasadena, CA. We’re going to the Rose Parade tomorrow and I can’t wait. Being around people I love combined with an increase in energy has been a special kind of medicine that has undoubtedly helped my mending process.

When I was really sick, the last thing on my mind was exercise. It was the first time in years that I had no care whatsoever for how inactive I was. The little energy I did have was completely devoted to getting myself to work and performing the most basic of functions. Needless to say, my fitness kind of went down the tubes. I also lost a good amount of weight, a lot of which came straight from my hard-earned glute and quad muscles. Sad. I think I spent about two and a half weeks of literally doing nothing at all, and once I started feeling better, the most I could muster up were little hikes or walks around my neighborhood in Colorado. And when you haven’t been doing anything at all for weeks, those baby walks feel like a huge accomplishment.

As you might remember, before all this whole flare up business happen, I wasn’t running at all. I was doing physical therapy on my bursitis-filled leg 2-3 times a week, and things were definitely getting better. But once my gut decided to explode, I couldn’t manage to get myself into PT anymore, and my grand return to running was further delayed. Once I started to feel like a human being again, however, my curiosity of how my bum leg would fare on the run began to return. I was out-of-shape, I was at 6,000 feet of altitude in CO, and I knew my injury wasn’t totally healed. But still, it was too tempting to not test.

So, on Christmas Eve, I laced up my neglected running shoes and very slowly started to jog. I felt creaky, awkward, and slow. My breathing was heavy right from the start, and I can guarantee I haven’t run that slowly in years. But, somehow, 2.5 miles later…I was still standing upright. There was nothing pretty about it, but for the first time in a month and a half of PT exercises, ellipticals, and illness, I ran.

Two days later, I was able to get out again, and this time I went a little over 3.5 miles. And two days ago, I ran for 50 minutes. It’s humbling, to say the least; my stride is janky, my speed is gone, and my lungs are burning after just a mile. But we all have to start somewhere, and given the state of my body just a few weeks ago, I consider this progress a big success. It’s going to be a long road, no doubt about it. My leg is still healing, and I’m going to continue to do all of the tedious recovery necessities to be 100% pain free again. The endurance fitness that I have always been able to fall back on has been wiped away, and I’m essentially starting from scratch.

But, I can’t help but think of this as a beautiful opportunity for small victories. On Christmas Eve, 2.5 miles felt like a success. 2 days ago, 50 minutes felt like an even bigger success. In this regard, I’m looking forward to reliving all those wonderful milestones that come with returning to running.

Additionally, starting over gives a whole new appreciation for the sport, and all the great lessons learned along the way. I can promise there will be some whining and general complaining during the process, but I’m hoping to use this opportunity as a sort of running re-birth; as a chance to get smarter, stronger, and hopefully at some point — faster.

So while the end of 2013 wasn’t what I expected, I’m hoping that my reintroduction to the running world will make 2014 something truly special.

And in case you’re wondering, I do have a plan for Boston. And a plan for the year in general, both of which I’ll be sharing soon.

Happy happy New Year to everyone! This was, overall, a wonderful year for me with a not-so-wonderful ending, so I’ll be both celebrating it this evening and kicking its butt out the door.

1 thought on “Coming Back to Life, Slowly”