Did I blog yesterday? No.

Was I going to blog yesterday? Yes.

So what happened? Well, consider my lack of communication an act of sparing readers from my down-in-the-dumps-ness. Yes, that makes sense.

You see, I had big plans for some positivity, some weekend recap, and some random banter. However, life chose to thwart that plan a bit—and alas, my ability to even fake happiness yesterday was completely zapped away. I didn’t feel I should divulge my feelings to the Internet, so I decided to follow the mantra that Mom always says, “It will be better in the morning.”

And you know what? It is. Sure, things are still pretty damn crappy, but thanks to my unavoidable optimistic hard-wiring, I’m feeling about 700% better than yesterday. And heavily caffeinated, which is a staple in the RB recipe book of creating a good mood.

But let’s back track a bit. Because despite my resentment toward the shit that’s gone down, I cannot leave you hanging like that. Note that I am wary about reporting personal, non-injury related bad news on my blog, however this isn’t so private. So, onward.

On Sunday, BF, my friend Anna, and I were headed east to do some hiking. BF was driving my car, while Anna and I followed in her own. To make a long story short, BF started going 30 on the highway, pulled over, we screwed around with some engine starting and stopping, and it was concluded that we needed to get the car towed. We still managed to get in our hike thanks to Anna’s vehicle, but at the end of the day BF and I spent our evening getting my beloved Glinda settled at an auto repair shop in West Seattle.

(Side note: AAA can see right through it when you try to get a membership after you need their services. In summary, get AAA before you need them—it’s worth it.)

Anyway, yesterday I went back to the auto shop with some high hopes for a simple, fixable, not-too-expensive diagnosis for my poor car.

Can you see where this is going?

Take the opposite of those high hopes, and that’s exactly what the mechanic got to tell me.

Essentially, my car needs a new engine, which including the labor involved in installing it, is going to come to oh just a little bit less than I initially paid for the car. Super duper fun times.

So, after a lot of discussion over what to do (you know how those conversations always need to happen in crappy car situations), I decided to bite the very expensive bullet and get my car fixed. It’s really, really not an ideal situation—but that was the best decision to make, and so all I can is move forward.

Other than feeling really bad for my car (she’s my baby!) and being pissed at the blow to my bank account, I was mostly just sad for all the things I wouldn’t be able to do/would need to put on hold due to this super inconvenient circumstance.

In truth, I was really just feeling sorry for myself. I spent most of yesterday alternating between crying and racking up a list of all the things I need to currently buy, pay off, and save for that will have to go to the back burner.

You know, because adding up all those things was really going to make me feel better about the whole thing.

It was a pity party to say the least, and while I’m still wallowing over the set-backs this will undoubtedly produce—the truth is, these things happen…and it’s going to be okay.

Sure, it sucks, and as a young 20-something I’m not exactly the most equipped person to handle the financial blow of it all. But, it really is all about perspective.

I might not be able to buy the road bike I’ve been planning on for a little while longer, but you know what? I’m still healthy, I’m still clothed, I’m still fed (a lot), and I’m going to be fine. There are many people who would have had to cut their losses completely in a scenario like this. And with that said, there are many people who don’t even have a car—nor the means of retaliating from a situation like this. When I can shift my perspective in that regard, it makes the whole scenario a lot more manageable.

Am I going to be paying an extra, hefty monthly bill for a while? Yes. But, it’s not the end of the world.

When I began realizing that this situation is only going to be as severe as I make it, I began to draw the same parallel to my lingering injury. The fact is, I’m still in pain, I’m still not feeling like I’ll be long running for a while, and I’m still in and out of very pissy moods about this whole thing. However, when I can pull out my better-self and think about this injury in the grand scheme of things, much like my car, it doesn’t seem to be such a big deal.

I can’t run right now, but that doesn’t mean I won’t run again. I know I keep repeating this (mainly because I have to keep re-telling it to myself) but all runners get injured. You are almost as much a runner when you’re injured as when you’re busting out PRs…it just comes with the territory. When I think about all the professional and Olympic-bound (Kara, I love you) runners whom I admire and look up to, it’s comforting to realize that all of them, at one point or another, has been sidelined—and, obviously, that never stopped them from doing great things.

Being a great runner isn’t about always being able to bust out a marathon on a whim or running fast every single day. It’s not even about times, podiums, or number of medals hanging in our houses. It’s about having the mentality that no matter what situation we’re in, whether sidelined or on the race course, all we can do is our very best. If we do that, there’s nothing to be disappointed in.

The transition from the whole car perspective thing to my injury reflection was a bit janky, I realize, but I think the biggest lesson I’m coming to terms with is that no matter what the scenario…everything will really be okay. In the big picture, hiccups happen, but they are only as big as we make them out to be. Even when we’re feeling overwhelmed, sad, or generally pissed off at the things that have brought us down, it’s so important to remember that we are still in control—no matter our feelings to the contrary. Because we are…we just need to keep the reigns in our own hands instead of letting our emotions and stress take them away.

Okay, enough serious stuff. I will leave you with some pictures from the weekend, instead of detailing all the adventures. As I said on Friday, my friend Anna came to visit me, and we had a wonderful time. Here is some documentation of that wonderfulness in photos. Spoiler, there was a lot of food involved.

Ikea! Please note our new indoor tree. Name yet to be determined.

A trip to Via Tribunali in Upper Queen Anne was the ticket for our Saturday night feeding, and it did not disappoint in the least.

…And what goes better with a bottle of wine than a huge floppy pizza? This was all mine, in case there was any confusion. 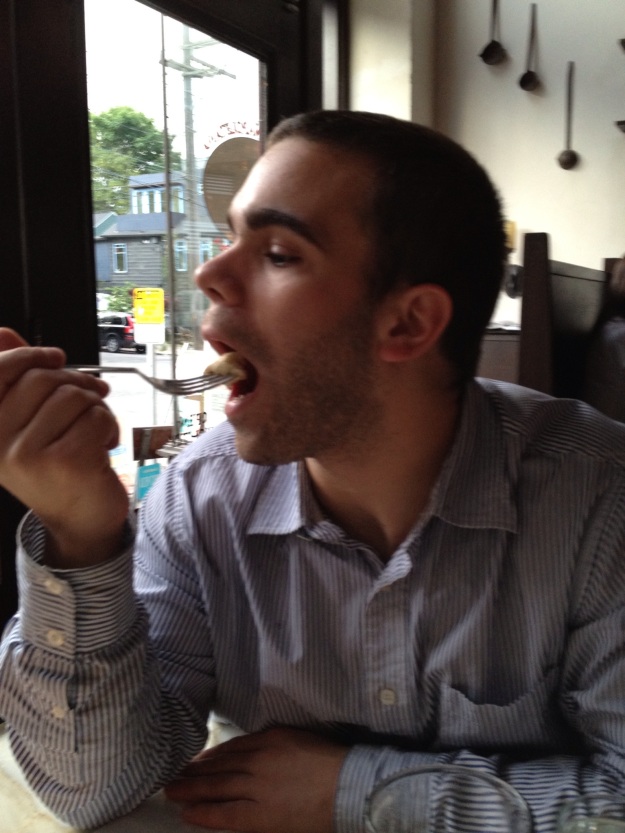 Molly Moons ice cream! No, both are not mine, this time…

So, obviously I have a certain tendency to take pictures at meals. No need to photograph our beautiful hike, or any other activities for that matter apparently…I promise to get better at this!

So, regardless of the car mishaps, my weekend was certainly fantastic, and I’m thankful to have such a wonderful friend who will venture across the state to eat, play, and laugh with me.

I hope your week is going well so far! And if it’s not, try taking some control over your situation, and remember that although things could be better, they could always be worse as well. And if all else fails, go find yourself a pint of B&Js, or a puppy to play with. Strangers’ puppies are perfectly acceptable.