I really feel like I’m saying that a lot more frequently than normal. Again with time dwindling away…

Where does it go?!

Actually, I think I only feel like this because I always posts on Fridays, therefore my forced Friday acknowledgment makes the time seem to go quicker.

Hello! Welcome to the end of the week, and another round of “I have too many other things to say there I’m not doing Friday Favorites, AGAIN.”

Sure, I could save up all of my running-related thoughts for posts in the future, but I’m the kind of person who doesn’t necessarily like to wait on the things that are currently going on in my brain. Also, I never “draft” posts—that would be way too productive. I’m sure you thought I spend days ahead of time writing my posts, given their not-at-all rambling and stream of consciousness nature.

Sorry to let you down. I fly by the seat of my pants and often have typos.

So, despite my lack of dedication to Friday Favorites and my fear of the speed of time, I am generally feeling rather cheery today. Superb workout (including RUN!) and my beautiful, tall, law school attending bestie Anna is coming to visit for the weekend. 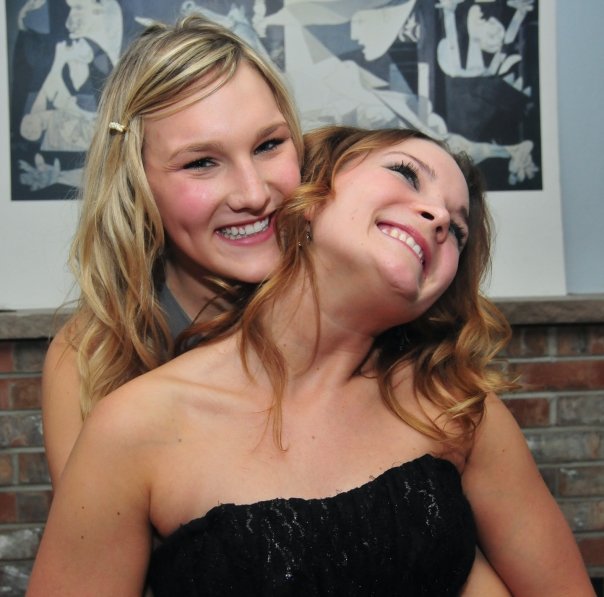 Friendship! This is actually one of the few “nice” pictures we’ve taken.

Anna and I get along for a number of reasons, but mainly because our friendship takes little effort; it’s easy, it’s fun, and it has no filters. We also enjoy many of the same things, namely being active and food—sometimes in that order, sometimes not. With that said, our weekend will consist of some hiking, some Ikea browsing (also known as people watching, impulse buying, and getting lost), and food consumption. 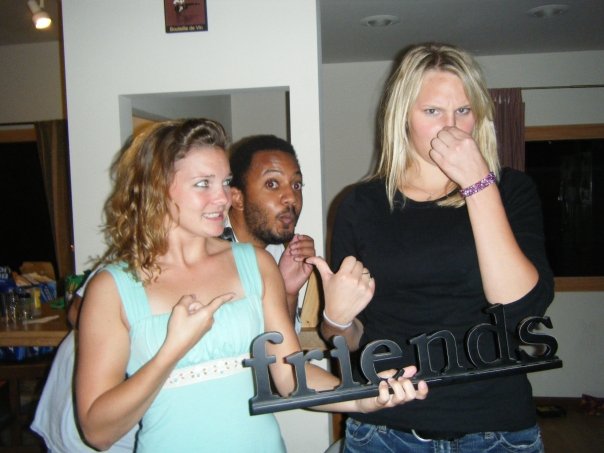 Additionally, I have some pretty exciting endeavors/news in the works. Exciting is relative, meaning it might only be exciting for me, but I am PUMPED for some things going on in the near future. More on that on Monday! Let’s just say I spent the better part (aka: all of) yesterday morning plotting/emailing/texting/Tweeting with Nicole about some pretty sweet and sweaty plans. I love having people that can share in my athletic ambitions.

I’m in this weird balancing act right now of settling into a routine of not running as much, trying new things, and wanting really bad to run again. The thing is, though, it’s becoming just that: a routine. And truthfully? I don’t hate it.

Yes, I love running all the time. Particularly long, salty-sweat face runs that leave me in a heap of endorphin-filled giddiness on the couch, whilst stuffing oatmeal in my face and planning my dessert for the day.

Running is the best. DUH.

But, I have to say I am really digging discovering all of my body’s short-comings and working on them.

Do I have calves that don’t fit into most boots? Yes. Do I have quads that could likely strangle someone? Yes, not a pleasant thought there. But other than that…I’m realizing that I have a lot of room for improvement in terms of my strength, and it’s both humbling and exciting to figure that out.

Case in point: the current state of my rear. It’s sore. It’s been sore since Wednesday. I definitely have not been massaging it in public.

With the exception of some occasional leg lifts, I rarely did any kind of glute work when I was logging heavy miles. This isn’t awesome…considering the strength of your rear muscles and the propensity of getting injured are directly related, but the truth is I never had any interest. I might love a long, exhausting run or a sweat-covered spin bike, but honestly…I actually shy away from things that I know will be hard. Once I am confident in doing something (such as the aforementioned cardio activities) I have no problem hopping right into them…but give me something I’ve never done before and I curl into a ball of stubborn reluctance.

And thanks to my new-found need and interest in testing out my weak points, I’m realizing that being a good athlete isn’t actually about focusing all our energy and attention into the things we’re good at. Sure, if we’re good at something—we want to capitalize on it, but being a good athlete is actually more about finding the areas we need to improve on more than the things we already excel in.

I am so guilty of getting into a place of routine with my workouts. I know they will be fulfilling enough to tide me over, I know that I will get through them no problem, so I’m content with never changing them. Sure, a 10-mile run every Tuesday is a great workout, and it kept me in great running shape, but hand me a pair of hand weights and make me do single-leg lunges? I turn into a crying toddler.

Do you see the imbalance? I think a lot of us do this…and although it’s great that we can excel and be great at certain things, that does not excuse us from making our bodies work hard in other capacities.

Which is a very wordy, roundabout way of bringing back to where I am now. I don’t think at least one of my muscle groups hasn’t been sore in the past two weeks. I’m doing exercises that I have long proclaimed to loathe, simply because they are hard. I’m accepting that not being the best in a class is okay, and I’m letting instructors give me advice.

And I’m loving it. I love being sore, even though it necessitates doing things that are uncomfortable or even painful. I love feeling that there’s a lot of room for improvement, and I love my new mentality of “all-around” fitness as opposed to the one-dimensional cardio focus that I tend to hide in.

This whole way of approaching my physical health hit me right between the eyes this morning when I thought about trying to run. And while I bellyache about not running, and all I seem to think and talk about is when I can run again…I somehow felt reluctant when it was go time. Was it because the walk/run is annoying? No, I’m getting to be okay with it. Was it because the weather was bad? No, no rain.

It’s because I knew it would be hard. Hard, sure, because of my persnickety IT band, but mainly just hard, physically. Even in marathon shape, you can’t go a month with minimal running and expect to just jump back into it effortlessly.

(Side note: Running is hard no matter what. I am simply speaking as someone who is normally in running shape and is currently out of running.)

Running has become a little more ambiguous than I’m normally used to. That bothers me a little, but I’m happy that running can slowly become a part of the mix of things that I’m working on getting better at. I am fairly confident that once my injury whittles away, my running is going to come back no problem—but for now it’s something I need to challenge myself with. And that’s okay.

What’s my point? I don’t really know…there’s a lot of rambling going on in there.

Ultimately, I think I’m realizing the importance of leaving our comfort zones. You might be able to bust out miles week after week, but are you actually challenging yourself to be better?

I encourage you to look at the fitness safe zones you stick to—and maybe try and step out of them a bit. Improving upon your weak spots isn’t going to take anything away from the things you’re already exceptional at, and in fact—it will probably make you better in them. Whether it’s adding speed work to your training routine (I’m speaking to myself when I say this one) or going to a weight lifting class for the first time—try getting a little uncomfortable.

You’ll be sore, you probably won’t be the best in the class, and you will probably utter many swear words during the process. But you will positively leave in a better space than you started off in. We cannot get better by sticking to the same routines—we plateau, we get bored, and eventually our fitness can actually decline. We get better by pushing our own limits, doing things that are hard, and regularly questioning how we can improve.

What kinds of things do you want to incorporate in your fitness routine? What do you actively avoid, for fear of failure or it being “too hard”?

3 thoughts on “Getting Uncomfortable”