I will fully admit that I have actively avoided writing about this race.

It happened, it didn’t go the way I wanted it to, and I wanted to stuff it in my back drawer and forget about it.

The problem, though, is that keeping something hidden away doesn’t mean it’s gone; it mostly just means it’s taking up extra space and energy when it shouldn’t be. So here I am, putting this race in the proverbial recycle bin as opposed to letting it lay around, clogging up my life.

It’s not that it was even that bad, and it’s not that I’m necessarily “embarrassed” by it. It’s just that it was technically a goal race that went awry, and I didn’t want to really own the fact that my goal race for the spring didn’t go according to plan.

The point is, bad races happen, and this bad race happened to be the race I had my eye on for a few months. There are several reasons it didn’t pan out the way I wanted it to, and I’ll take the blame for a lot of them. Regardless, here’s the recap:

I was feeling exceptionally fit going into Platte River, fitter than I’d felt since late 2013. I’d had an effortless tempo-long run just two weeks before in which my tempo pace was easily below my goal half-marathon pace, and it felt completely do-able. I thought that my PR of 1:36:11 was within reach for this race, and I had fairly solid confidence that it was going to be “that” kind of day. To be blunt, my instincts about how races are going to go is typically pretty accurate, and I’ve always thought that there is a direct correlation between my race execution and my “hunch” ahead of time.

Needless to say, I was excited on race day. Ready to run fast and prove to myself the huge strides I’d made since moving to Colorado. The race is a point-to-point that starts in Littleton and ends at the South end of Denver. I lined up near the front of the pack (overly cautious to not do any weaving), and after a beautiful National Anthem, we were off. I had a loose race plan to start between 7:25-7:30, then drop down after the first few miles or so to 7:15-7:20. It was moderately daunting, but again…I thought it was attainable. I’ve learned time and time again the advantages to negative splitting, so this race plan seemed perfect.

Well, somewhere along the way, that race plan was entirely forgotten. I have no explanation or justification other than getting caught up in the excitement of the start of the race and feeling really, really good. This was, however, where my race kind of imploded – without me knowing it at the time.

I actively avoided looking at my splits after this race because I knew I would face-palm myself for the tangible proof of the mistakes I made. Really Robyn?! Really? There was no reason to run that fast, but I did…and it will explain more later on.

These miles wound through Littleton downtown and spit runners out onto the Platte River trail, where we would spend the majority of the race. At this point, I felt great; in control, working, but not overworking. I also noticed very quickly that it was going to be a warm race – and I’ll spare you from my ranting once again of how I feel about that.

The trail navigates along a river and is primarily a paved bike path. It’s a net downhill course, but the terrain itself is moderately rolling. I tried to control my pace a bit more after the first 5k and get into a rhythm, but around mile 5 – when I should have just been getting into a settled pace – I was already feeling like I was working.

Right around halfway is when I started not feeling well. I was hot, my legs were heavier than they should have been, and generally I just felt kind of lonely. It’s a smaller race, and there weren’t a ton of people around me, which is typically fine – but the scenery itself was just kind of dull and lonesome.

Still, I was trying to hold a 7:20-7:30 pace. I knew I had gone out too fast, but I also knew I had the fitness to back up my effort. Alas, this became very difficult, very fast. I could not get under 7:30, no matter how hard I pushed, and when you’re already counting down the miles at mile 8 of a half-marathon, it’s hard to find a sense of confidence.

Julia and I had planned beforehand that she was going to jump in with me at mile 10 to run me into the finish. In my head (and probably both our heads) it was going to be a fast, celebratory finish with my training partner towards a new half-marathon PR (or close to it). So it’s no surprise that I was disappointed before I even got to her knowing this wouldn’t be the case. It’s not even that I had given up, as I was pushing as hard as I could, it just wasn’t happening for my legs. Regardless, focusing on getting to her was a good distraction, and I was desperate for anything I could get at that point. Again, there were little to no spectators, somewhat blah scenery, and I was feeling every little up and down we came across; getting to Julia felt like a beacon of hope.

I had certifiably hit a wall at this point. Yes, a full marathon wall. I wanted so badly to walk, to be done, to just be doing ANYTHING other than running that race. It felt crummy in all regards. When Julia picked me up, I signaled a thumbs down to her and told her it was not my day. I actually felt bad that the low-7 min/mile pace she’d been planning on was barely a sub-8 at this point (which, in hindsight is silly…but you know, race brain). I let her chatting distract me as much as possible, but I was confined to ugly death-march status at that point.

In the middle of mile 12, you hit the only significant uphill during the course, in which the course veers from the trail onto a highway overpass. It’s steep, it’s ugly, and at that point in the race…it’s unrelenting and brutal. I had Julia run in front of me and held on for dear life. The only saving grace was knowing the finish was close once we were up.

Once we were on the other side of the hill, I did the mental math for the first time since the race started of what my finish time would be. Realizing that I still had a shot of running under 1:40, I gave all the gusto I had left when turning the corner toward the finish line.

The final sprint was brutal, but seeing Dan, Corey, and Adam was enough encouragement to sneak in right below the mark. 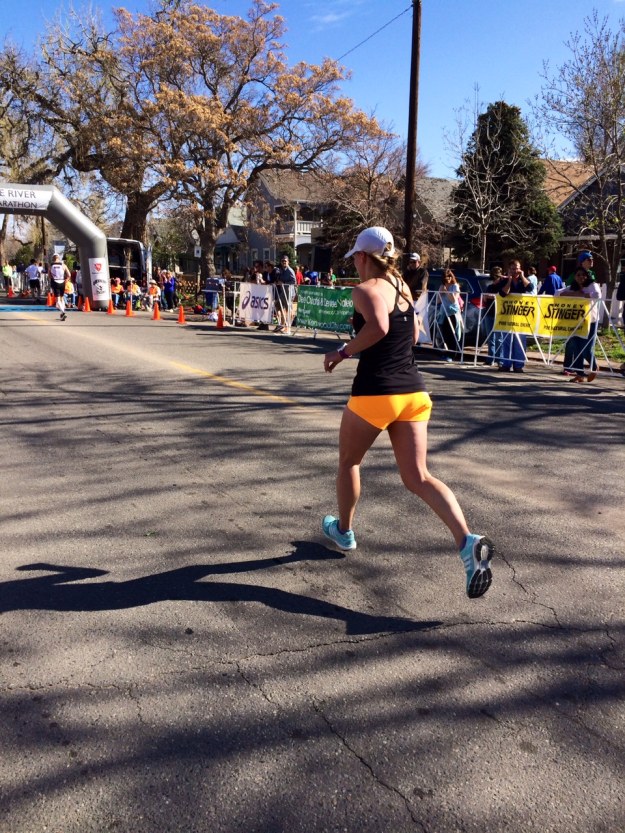 In all honesty, my first thought upon finishing was, “FUCK, that was so bad.”

Within a few minutes though, I was consoled with the realization that if a bad race for me right now is a sub-1:40 half-marathon, then I should have some confidence in where my speed is at. Sure, the race was terribly executed and it generally just was not my day, but knowing that just 6 months ago this would have been a very, very good time for me…I can hang  a hat on that.

I somehow used to run without this girl, I don’t really know how though.

I considered for a hot minute trying to salvage my grand half-marathon PR spring goal plan, but truthfully…my heart wasn’t really in it. The true goal for the spring was to bring my speed back to the level I was once at, and I’m feeling very good about how that has progressed. The fact that I dropped nearly a minute off my 5k personal best in March and followed up Platte River with a 35 minute 5-miler is highly motivating that progress is happening. I’m also running Bolder Boulder this upcoming Monday which I’m hoping should be another fun test of where my legs are at.

So yes, this was not a great race, and generally just not a very smart race. But, all these experiences teach us a little something more about ourselves and our running – and I intend to utilize this hard-learned lesson in whatever is to come.

In the meantime, I’m loving the shorter, speedier races, as well as the training that gives me the option to run when I want, how far I want, and how fast I want. Hard to complain about a measly half-marathon when running life in general is just swell, and I’m grateful for it.