Lots of things to say about yesterday’s race. For a quick minute in there, I was disappointed that I was (spoiler) only 20 seconds off my PR. I was also disappointed for an instant that my watch (along with those of several around me) read a long course and not a true 13.1. However, after those thoughts subsided and I thought back on the race that I’d run, I landed in the spot I am today: both very pleased and very encouraged.

I went into this race with some trepidation about the conditions (blustery and rainy) but also with a lot of gusto to run a good race. Relatively speaking, I hadn’t raced in a while, and I was ready to see what my legs could do. I rested all day Saturday (a new approach for me), hydrated well, slept well, and treated the run like a real race. 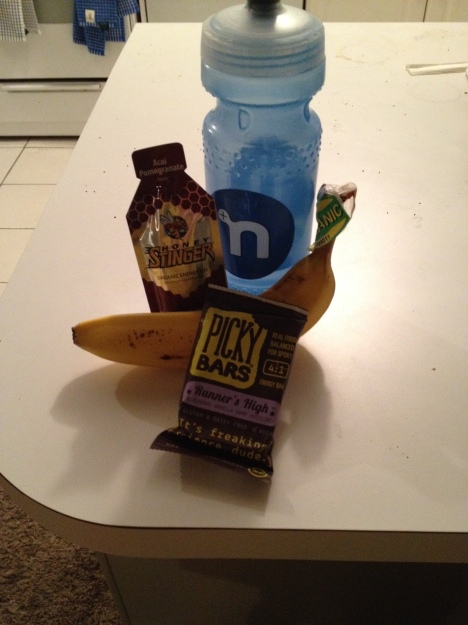 Low and behold, race morning comes, and the drive up to Bellingham was…ominous. It was pouring, windy, and the perfect conditions for sleeping in and hot coffee…not running 13.1 miles in spandex and a tank top. But I kept my spirits high, and after an easy bib pick-up and some dynamic stretching, I forgot about the weather and tried to get in the zone. Spotting some fellow Oiselle teammates helped kindle my excitement, and I felt proud to be wearing the same singlet as such fast women.

Before I knew it, the countdown was on, and boom…we were running a half marathon. Tried and true to the start of any race, I a) felt incredible and b) knew I was going too fast. A look down at my watch about a half mile in would verify that my 7:00 “easy” pace was certainly not the way to start off a distance race, so I tried to tug back. Ugh, why is this always so hard? Every time I swear to myself I’ll follow the rules and hold back at the start, and every time I cross a start line I abandon all those good intentions. But, I forgave myself, let a faster mile 1 clock in, and prepared to reel in the reigns.

I felt so good during these first few miles. Like, better than I’ve felt running in a long long time. Isn’t that what we hope to feel during races? Anyway, I alternated between sharing paces with others, pulling back when they surged, and going ahead when they fell behind. Generally, it just felt great to be racing, and I let that mindset and momentum carry me through the early miles:

In terms of pacing for this race, my goal was to stick to 7:30s for the first half and open it up if I could during the second half. So, once I reentered the 7:20s, I considered it okay and just went with it. I also knew that there was an incline coming up in mile 4 which would get things back in line.

That incline came and I already knew that my legs were in for a hard race, should I keep this pace up. My breathing sped up and my HR surged a little, reminding me that I was—in fact—racing. But, per usual after a hill reclines to a flat grade, my legs started turning over again and invited the steady downhill that would come in the next few miles.

I knew that miles 5-7 were on a downhill, and I’d planned ahead of time to use those miles to my advantage. What I hadn’t considered, though, was that these miles would also change the direction of the course directly into the forecasted wind. These miles were also pretty exposed, which made the wind even more difficult to avoid, but nonetheless…I tried to gun it a little.

There was a bit in there where my watch read 6:xx, which both horrified and exhilarated me. I’d never seen a pace in the 6s during a half marathon, and it was a definite confidence booster to see that pop up.

The course flattened out after this, and the headwind seemed to take a turn directly into our faces. I tore open my gel around this point too and held it for the next few miles, taking drags from it whenever I felt steady. We reentered downtown Bellingham, and there were a few twisty inclines that definitely slowed me down and reminded me of the miles I’d already logged. My energy started waning a little around miles 9-10, and looking back on the elevation profile of the course, it’s obvious that those mini hills took their toll.

We were on a dirt path along the bay at this point, which was warmly welcomed after all the pavement pounding. Although my watch had been a little off the whole race, it was really off once I got to mile 10, which was a little discouraging. My miles were beeping at least 2/10 of a mile before the mile markers, and a fellow racer confirmed that her Garmin was at the same distance as mine. Admittedly, I fumed about this for a bit, considering I thought a PR was within reach should the course be 13.1, but I put that thought out of my mind and tried to just run the race I was running and enjoy it as much as I could.

Once I got to mile 10.5 or so, I resolved to kick it up in the last 5k, and that mind shift seemed to give me a bit of a second wind as well. I was hurting, but not done yet, and I wanted to finish strong. There was a STEEP boat ramp during mile 11 that felt like I was walking, which took a lot of self-talk to get up and over especially with another hilly ~1.5 miles to go afterward.

Alas, up I went, and we turned into the homestretch. Something I really like about this race is that it’s an essentially straight shot to this finish, and it seemed like everyone around me was pulling out everything they had to fire their final canons. I’d been leap-frogging with a few men the whole race, and all of us were straightening up and putting on our best race faces during this final stretch. Lots of fun.

However, things were hurting. This last mile was consistently up and down hill, and I was definitely feeling all the changing elevation, despite how minimal it actually was. When my watch beeped “13” I was nowhere near the mile marker, so I made a mental note to check “my” half marathon time in another .1 miles.

Eventually, the finish line came into view, and I dug out my final dregs of speed as much as I could—I’ll be damned if that clock changes to 1:39! 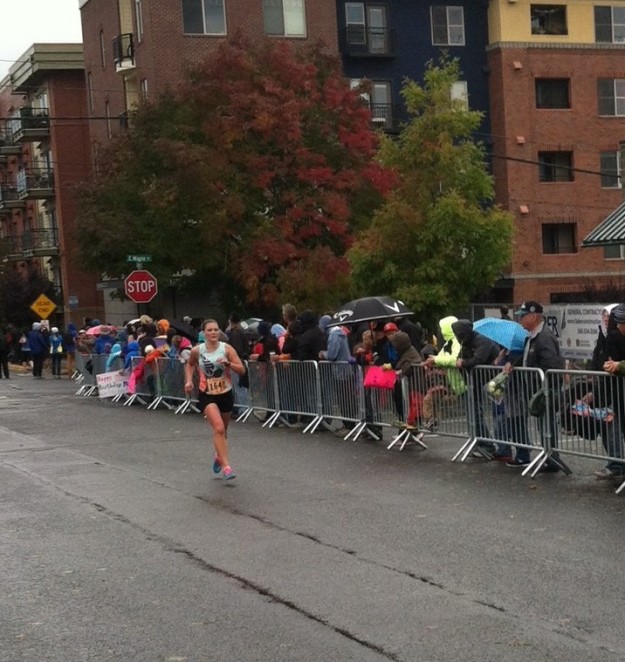 After a momentary feeling of being punched in the gut, I pulled it together, got my medal and space blanket and regaled on what just happened: Was that the fastest I’ve ever run before?

Technically, no. My official half-marathon PR is 22 seconds faster than that. But, in reality…it actually might be.

I am certainly not someone to play the, “But my watch said xx:xx!” card. I believe we all run the same course, the same race, no matter what, and the numbers we clock individually are secondary. But, .2 miles off is significant enough that I’m inclined to look at my pace according to the distance I logged rather than a 13.1 distance. Furthermore, in the case that I ran 13.32 miles in 1:38:47, I ran a 7:24 pace, which is easily faster than I’ve ever run a half marathon before. Take it or leave it, I realize this is a controversial topic, but I’m having a hard time ignoring that figure.

Despite the could-haves and maybes of the off-distance, I certainly had miles during this race that were both unexpected and mini personal-record breaking. The fact that 6.32 miles were under 7:20s is incredibly encouraging, and it brightens my hopes for a 1:35:xx in the (hopefully) not-so-distant future.

I also felt like I was able to handle discomfort during this race much better than I’ve been able to before. One of my goals going into it was to keep my head on and not let the pain shadow my confidence. I tried to keep this in the front of my mind during those tougher miles, and I’m happy that I feel like I was able to stay comfortable being uncomfortable. There were some bleak minutes, certainly, but it felt like my resolve to push through was able to suppress those dark voices—which is something I’ve definitely struggled with in the past.

So, all in all, it was a great race. I’m happy that the rain held off (mostly), and despite the comprised conditions, I ran the best race I could. I have high hopes for what’s to come, and a little more gusto in my motivation to start training a little harder. The half-marathon is a fun and tough distance, and I’m excited to see what the next two this year have in store.

And a huge congrats to the other ladies who ran this race! In case I needed a spoonful of humble stew, the other 4 gals I ran with finish in 3, 4, 5, and 7th. Yes, really. Speedy ladies! Super impressive.

8 months old! Rosie’s nickname at daycare is “Mariah Carey” because of the hiiiiiigh octave she can hit with her shrieks. Her communication in general has been a huge highlight recently, with lots of “ba” and “pa” and “ga”, as well as the cutest tongue clicks! She started mimicking us when we coo or click at her, which feels like a fun little secret language. She’s our miss independent and happily plays with a pile of toys all on her own for long periods of time, but sometimes she just wants to be snuggled by mom or dad...and we happily oblige. It seems like we’re just on the precipice of crawling (position assumed in second photo!), which is certainly going to make things more interesting, but in general I’m loving each new stage more and more. Baby girl is becoming a big girl! 🌹#rosiecarole #eightmonthsold #babylove #cozyrosie
Tickle monster! Rawr! #babybear #legs #rosiecarole #cozyrosie #sevenmonthsold
Open roads and green hills are my kind of Saturday morning! May is my favorite month, and I felt all the spring feels today being reunited with my favorite runner in our favorite setting. 📷👸: @griffeletti #playgldn #seemyrun #runhighs #anysurfaceanydistance
First they’re sour, then they’re sweet. But really, Rosie Toes is always sweet! 🍭 #sevenmonthsold #rosiecarole #sourpatchkids #teeth