Life, as I know it, has gone a little haywire. In a good way—but the days of lazing my days/nights away seem to have disappeared completely, along with the rain and gloom. Essentially, summer has become playtime x 1,000. Not that I’m complaining, it’s all fun stuff, but man—being social is tiring. 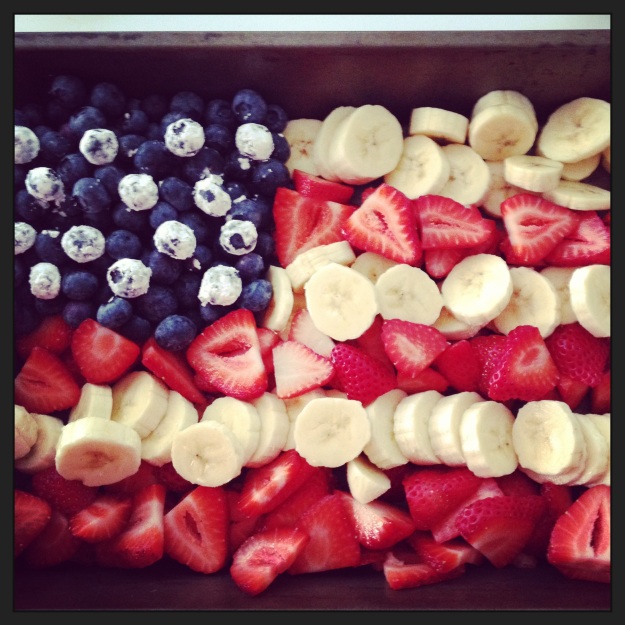 Unrelated photo from the 4th of July. But I did make this for a party and was ridiculously proud of it.

This past weekend was the essence of how busy life has been, and I feel like getting to Monday was more of a relief than how I normally feel on Friday afternoons. But that’s how it should be sometimes, right? It makes the time go by quickly, but that was going to happen anyway—right? Might as well fill ‘er up.

As I wrote on Friday, Mr. BF joined the big and bad 25 club, and we had a small celebration just the two of us that evening. No pictures were taken, but pizza was had and presents were opened. You can imagine it, it was lovely.

But the celebrating didn’t stop there. We had a whole banaza planned for Saturday, involving lots of beer and lots of raw fish.

But first, I had to get a long run in. I wasn’t too concerned about mileage for this weekend, considering I had already logged 38 miles by Friday, but I still wanted to take advantage of the beautiful day. My plan was for 14 miles, and to start slow and finish fast. I wanted to negative split the whole run and also practice this whole “fast finish” idea with my last two miles being the fastest. 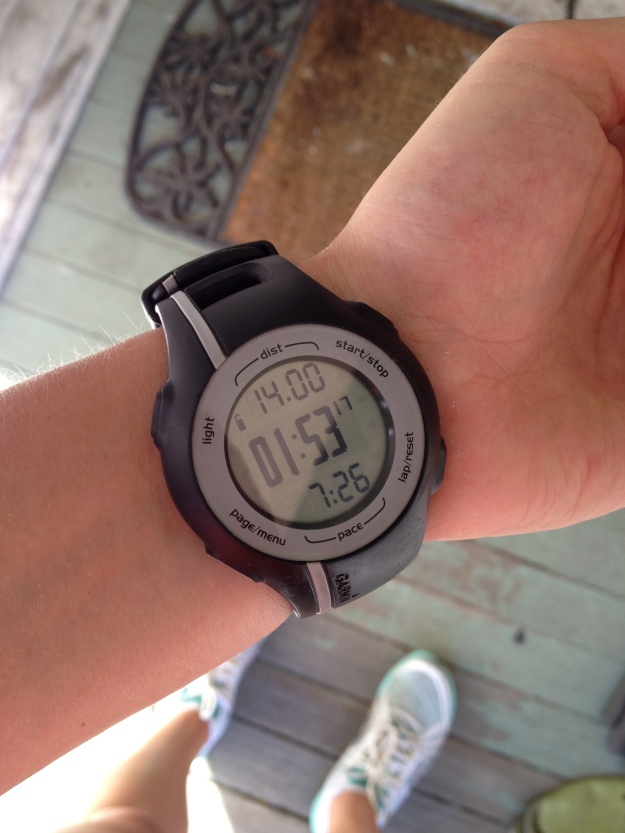 This picture doesn’t demonstrate much (and I’m sure you’ve never seen one exactly like it before), but overall the run was a success. The second half was 3 minutes faster than the first, and my last two miles clocked in at 7:24 and 7:26. And let me tell you…fast finish is no joke. Fatigued legs + rising heat + increased speed= a nice kick in the bum right at the end of a run. Trust me, if you want to really feel the effects of a long run, try it out. I liked it though…great practice for race conditions.

After some reading, coffee-ing, and sunscreening, it was off to the International Beer Festival where we met up with several friends. As if I wasn’t dehydrated and sweaty enough that day already…

I had so much sunscreen in my hair and was being SUCH a diva about it. I don’t know what got into me. I can deal with unwashed, sweaty hair multiple times during the week—but heaven forbid my just-blow dried hair gets a little grease in it? I don’t understand.

Anyway, it was awesome. Tons of sun, tons of tipsy/happy Seattleites, and tons of delicious international brews. I’m trying to hold off on drinking for the most part these days thanks to my super pissy intestines, but I made an exception this day and scouted out how I could get the most bang (>8%) for my bucks (10 tickets total). It was successful.

We ended the night with pounds of sushi at Umi in Belltown. Again, no photos unfortunately. But we got to sit on the floor and ended the night playing credit card roulette (BF and I didn’t lose!)

Despite knowing everything that was going down on Saturday, I had it in my head that I would get up Sunday morning and go for a long bike ride. I knew that wasn’t happening on Saturday night (mostly due to fatigue…not beers), so I decided to go to spin instead. Also wrong…I woke up Sunday morning and it took all of 1.5 seconds to decide I needed more sleep. I blame 4th of July for all of this lingering tiredness. And Belgium dark hefs.

Eventually, after watching Andy Murray reinstate British reign at Wimbledon, I got myself to the pool for a nice long swim. I swear, sometimes swimming does the same—if not more—for me as yoga. It can be super meditative when I’m in the mood, which apparently I was yesterday, and I finished with a little over 2 miles total. My legs loved me afterward.

But not for long. Around 1 it was time to head to an Urban Scavenger Hunt birthday party for one of my oldest friends. Seriously, how fun does that sound? It was such a good way to get out in the city and enjoy the day. Three teams of four people broke out with our lists of things and people to find, and we spent 4 hours traversing all over the city hunting down our clues. 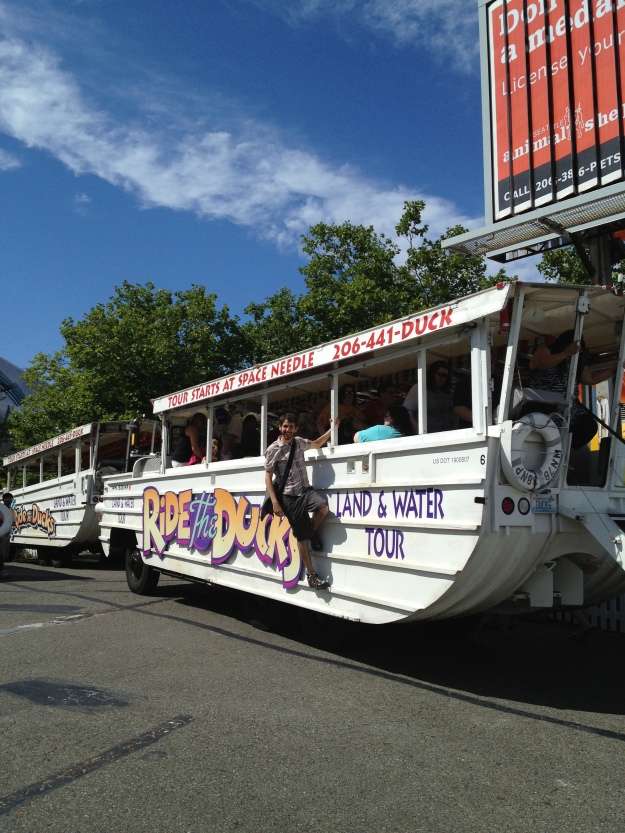 “Reenact a scene from 10 Things I Hate About You”

It was all ridiculously fun. We had no trouble filling the four hours with exploration and list-checking, and it ended up being a race to the finish line. After all the excitement, I couldn’t inhale a plate of fries or drink enough cold water fast enough. Finishing an adventurous day at a delicious restaurant is brilliant.

And to cap of what was a magnificently tiring and fun weekend, Seattle decided to pull this out last night:

This picture doesn’t even do justice, but I did drive out of my way (and prolonged going to bed) in order to try and capture the glory. All the people standing around should be a good indication of how freaking beautiful the setting was.

So now it’s Monday and I am a little bit happy to be sitting in my desk for 9 hours. That feeling is bound to pass by tomorrow, but for now I’ll be regaining my strength for all the other festivities that are coming up in the next few weeks. Spoiler…one of them involves running 35 miles in a little over 24 hours. Fun stuff folks, and despite my ever-present fatigue, I wouldn’t have it any other way.

And somehow, amidst all the mayhem, I managed to run 52 miles last week…easily the most since before Eugene. Slowly, those ultra relays are starting to get a (little) less scary.

Now, tell me about your weekend!