I had a really enthusiastic post planned for today in which I would detail how I wanted to focus on getting faster this winter and wanted to eventually go for a very ambitious half-marathon PR.

Those plans, thanks to the persuasive Nicole, are going to have to wait until after Christmas. Actually, maybe it’s just that I’m easily reeled in to doing  exciting things?

More details to come…but let’s just say that long distance and me aren’t going to call it quits for the season quite yet. I’m scared and excited.

So instead of telling you about all my grand plans to get faster in preparation for a spring marathon, I’m going to tell you about my weekend.

My beautiful and tall friend Anna came into town to play with ME, and play we did.

I really wanted to try Flywheel spinning, and since Anna had never been before, I figured we could both give it a shot. 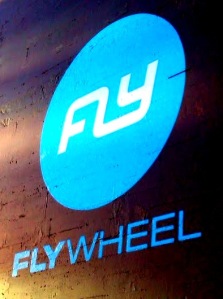 Wait, that’s a lie. I actually really wanted to go to brunch at my new favorite breakfast spot in Seattle, and Flywheel happened to be down the block. I’ve had moderate interest in Flywheel, but since Anna said she wanted to do some kind of activity on Saturday…I figured why not.

I know what you’re thinking: “Robyn, you had a bad cold and you ran a marathon the week before, how did FlyWheel go?”

(You definitely weren’t thinking that, but you should be, so go with it.)

I might be *slightly* exaggerating, but miles 15-23 of the marathon felt EASIER than this class. I don’t know if it was the nasty cold I’ve got, lingering fatigue, or if it was really just that hard, but this class worked me over.

The real problem was that I grossly underestimated how hard it would actually be, and admittedly I walked in like a cocky little beezy. I’ve done hard spin classes, and there are times when I wish certain spin classes were a little more challenging.

But not like this. This was spinning on steroids, and it NEVER let up. It was only an hour, but I sweat more than I ever have in a spin class, and it’s safe to say that I literally had nothing left in me at the end. Anna agreed with how hard it was, which made me feel better, but I haven’t been so humbled by a workout in a long time.

On the good side, it was a great class, and I’m sure I would have loved it without the whole post-marathon and a cold thing going on. The place was also super swank with towels, water bottles, burly men ready to assist you on the spot, showers, and rental shoes. I’d never worn clip-in shoes before, and I could tell how much of a difference they make. Of course, now I really really want some. (BF, this is the time when you can start getting Christmas ideas via my blog innuendos.)

Afterwards, we made our way to my original intention for the outing, Portage Bay Cafe, to down some French toast and crab cake eggs benedict (you read that right).

That night, my sister Corey came down to Seattle and we went to see my all-time favorite show, Wicked. I originally saw Wicked in London when I was studying abroad, and there have been few performances that have had such a big impact on me. “Defying Gravity” remains my number one inspirational song, and it’s a staple on my race-day playlists.

Dark theater shot of the three of us.

Anna, will you come live in Seattle and play with me every day? Law school is lame.

The show was fantastic and I was so happy to get to see it with two of my favorite people.

Another dark theater self-portrait…with proof we were there.

I broke away from my ususal couch-and-10 pm-bedtime Saturday raging night routine and went out with some more friends after the show. Again…not the best idea with a cold, but I’ve heard that tequila and Robitussin essentially do the same thing. Right?

But, it was all in the name of seeing friends and having a grand ‘ole time—worth it. My cold might be worse today, but I bagged another great weekend to add to last week’s splendor.

After a very unintentional rest day yesterday, I went out for 9 miles this morning and felt tired but good. It was perfect out and surprisingly warm. I’ve recently foregone running with a watch, and it’s really helped keep me relaxed and moderately paced. = I’m admittedly a little scared to strap my Garmin back on because I don’t want to see slow numbers flashing back at me—so for now my competitive self will have to hold off. It’s all in the name of staying sane and healthy—which is what I currently care most about.

I hope everyone had a great weekend!

By the way…if you haven’t heard Lindsay became an ultra-marathoner this weekend at the Pt. Defiance 50k! Congrats Lindsay 🙂

3 thoughts on “Flywheel, Wicked, and a Change of Plans”