So, let’s rewind to last Friday, where I said that I wasn’t going to try to PR my weekend 5k.

Was that a lie? Yes. But I didn’t call my own bluff until the second the gun went off.

I truly was planning on a fun, no pressure 5k. And that’s actually what I feel like I had…except that the results, and the effort, were higher than I expected. No harm, no foul…I think I should probably just forget ever saying that I am not going to compete in a race.

But let’s start from the beginning.

BF and I jogged the 1.5 miles to the race start…which ended up being a great idea in terms of preparation, however it was IMO a little too long for a 5k warm up. Oh well.

There were a few hundred people gathered around the start line, which was outside of our local running store—West Seattle Runner.

{Side note} Seattle runners, if you’ve never visited WS Runner, I highly recommend going. They really know their stuff, they sell great products, and they are super nice! They know my name and I love it…maybe because I spend ample amounts of money there, or maybe because I have a bumper sticker with their logo on it, but I choose to believe it’s because they love me and want to someday sponsor me. It’s fine guys…I’m cool with that.

I digress. So, yada yada yada…typical race start, everyone lines up in their corrals, and we gear up to go. I was a little afraid because there weren’t very many people between me and the start line, but I figured I would just run my own race and hope for the best.

Gun goes off, Lady Gaga starts singing to me about the edge of glory, and I feel great. It felt so so so good to be running a race, especially in my own neighborhood. It was very Mr. Rogers’ theme song-ish, and I loved it. I looked at my watch about 3 minutes in and saw a 6:15 looking back at me.

Holy shenanigans Robyn, hold your horses. Yea, I had committed the single worst rookie mistake ever. But, I did feel great, so I slowed a bit…but when I turned the 1 mile marker corner, I was sitting at a 6:23 mile. In my head I was all, “Okay, sweet. But slow the f down homegirl.” Which I did, and kept on cruising.

It wasn’t until I turned the mile 2 marker that I started to feel a bit wheezy. Luckily, 5ks have this wonderful thing about them…they don’t last very long. I knew I could huff it out another mile, no matter how biley my throat was feeling. TMI? No…this is a running blog peeps, get over it.

It was at this point also that I knew there weren’t too many females in front of me. I had picked off a few from the start, and because the final stretch was a straight shot…I could see pretty far in front of me. I started to get a bit of a kick thinking that I might be able to place. I knew it was a long shot, especially since that has never ever ever been a race goal for me, but I figured if there was ever a time to try…it was in the last mile of a 5k.

Then came the hill. Oh, the hill. I have one thing to say about that hill:

I am, by the way, repeating the sentiments of every. single. racer in this 5k, as this hill was placed at literally the worst possible spot of the course. The majority of the course was either flat or a slight downhill, ideal for any racer. However, come mile 2.3 there was a fairly steep and half-a-mile long hill that destroyed any remnants of energy you still had in your legs.

I hated that hill. I’m a baby. I wanted to cry.

BUT I didn’t cry. I kept on going, and about 300 meters from the 3 mile marker, I picked off the girl I was fairly sure had the 3rd place spot.

SHWEEEET, I thought. But I was gutting it out and not feeling super awesome. 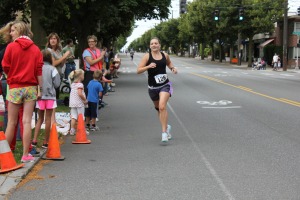 Not the most attractive shot…weird, I know, because race photos and flattery go hand-in-hand. BUT look at that mid-foot strike!

So I kept pushing, really wanting to just be done. About 20 feet from the finish line, while garnering all my hope for a sub 21:57 time, I saw something out of the corner of my eye.

Not one, but TWO females were sprinting each other to the finish line…and before I could gather my wits about me, they BOTH passed me, and finished within .02 seconds of one another, and about a second and a half ahead of me.

I got totally chicked, by TWO chicks.

However, when I looked at my watch, I was pumped. I had PR’ed by over 10 seconds, and I had a good feeling I was still in the top 5 females.

A few quick minutes later, BF ran in, and I got to cheer him in while simultaneously recruiting him to assist me in free sample collection.

Later, when the actual results were posted…I found out that I did finish number 5 for females, and first in my AG! I was/am definitely happy with the results, however it stings just a *little* bit that I had a 3rd place finish within my grip.

But it’s okay. It felt so good to go fast, and it felt great to exceed my own expectations. I love 5ks, and I feel like they don’t get enough credit. You don’t need to taper for them, they don’t take much recovery, and you don’t need to worry too much about pacing. Sure, if I hadn’t done that 6:23 mile initially, I may have finished stronger, but I don’t really regret much about the race. I think that might have been the fastest mile I’ve ever run, and I’m excited to see if I can push that number lower in some upcoming speed work.

And if you’re wondering how BF felt about the free coconut water at the finish, here’s about how it looked:

That’s actually an understatement. That first and only sip might have been spit into the sink.

But aside from some not-so-good coconut water, it was a great start to our Saturday. I ran a slow 3.5 miles afterward to round out to 8 for the day, and I rode the faster-than-normal running high for the remainder of the weekend.

Oh, and I found out yesterday that peacing out immediately after BF and I finished the race was not a good idea. I missed out on a ribbon and a prize for winning my AG. Sad face. Fail, RB.

Do you like 5ks? What do you think is the best race strategy for only 3.1 miles of racing? Do you like coconut water? We think it tastes like salt and toilet water.