Cheerio all you folks out there.

I’m going to be straight and tell you I had an especially peppy and optimistic post planned for today, however that plan has derailed a bit. There will still be pep, and maybe even some pizzazz, but for now I am allowing myself 60 seconds of bitching. After that, I’ll be done…but I need to shake some anger, so be warned.

After the hardest race ever, and after VERY CAREFULLY resting and recuperating my IT band has decided to be a huge a-hole and all of a sudden develop ITBS in the form of bad knee pain. I can’t really run, I hate it, and it’s ALL I WANT TO DO. I currently want to throw rocks at everyone that can run in the perfect, ideal, OMG SO PRETTY Seattle sunshine, and I get jealous even seeing people in  running clothes.

Dramatic? Yes. I know I ran a marathon only 8 days ago, and some pain may be lingering. However, I am currently void of all residual race soreness and aches, and I’m unfortunately thinking that I’ve got a pissed-off IT band that’s here to stay for a while. AND running is literally the only thing that bothers it. Spinning? No problem. Swimming? Piece of cake. But one mile into a run, I’m crippled with knee pain and I have to turn around. I’m pissed, I’m trying to be hopeful, but I would really enjoy going at least a few months without a new injury. DAMN YOU running shoes/form/gods/whatever that is ailing me with issues.

Can you tell how my morning started out? Yup…a solid 18 minute run in which more than half was spent walk/running. This was the first time I’ve attempted running since last Thursday(when I first felt the pain), and until this morning I have had no knee pain whatsoever. Booooooo.

Sorry, sort of went back to bitching there. Anyways, this is definitely a marathon-ripe injury and completely new to me. Anyone have ITB syndrome issues before? Care to share on your experiences/remedies? My foam roller has been feeling some hot lovin’ these past few days, but otherwise I’m not totally sure how to tackle this.

How about some happiness now?

I spent the weekend basking in the sun. Literally, that’s about all I did…and it was splendid. My skin doesn’t necessarily agree with the whole “splendid” part, but it will get over it once it cools off and accepts its new glow as opposed to its wintertime pasty horror.

After a double-spin class(my favorite!) on Saturday morning, there were few things I did the rest of the day that did not involve drinking a cold beverage, lying on the beach, reading a book, or eating. I wore a dress and everything. Part was spent with friends, part was spent alone, it was all-around a grand ole time. 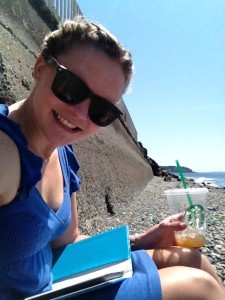 Also, if you weren’t aware, the Lakers beat the Nuggets in GAME 7 on Saturday night, and while BF hated me for a while during the game, it was awesome and I will be reaping the bragging benefits for an indefinite period of time. 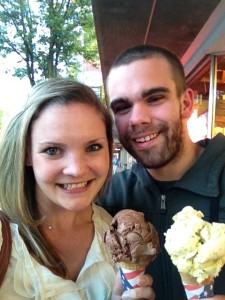 The sweet taste of victory is even better than a HUGE scoop of ice cream, which also happened this weekend.

Sunday was also spent in the sun, on a canoe! A good friend of mine works at a sleep-away YMCA camp, and she has access to Puget Sound boating galore. In celebration of her birthday, some of us took a massive “tribal” canoe to a tiny island out in the San Juans. Porpoise and bald eagle sightings, beer-on-board, and sunshine—I was one happy camper. And not to mention the scenery was absolutely fantastic. 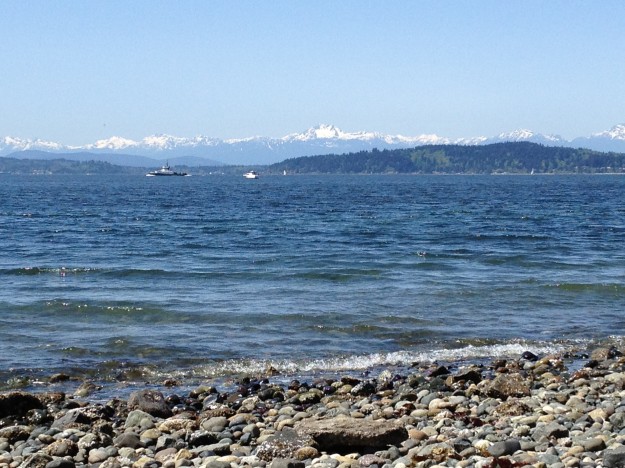 Mountains and sea, I love you. Yes, this photo needed to be HUGE.

The paddling was about an hour each way, and my back is feeeeeeling it today. I love doing things that are out-of-the-ordinary, and yesterday was one of my favorite days in a long time.

On my drive to the canoe ride, I was traversing along the exact path of about miles 20-24 of the marathon from last week, and just seeing the path made my shudder. I feel like I might develop some PTSD from that race—like seriously—and while I cursed every last hill and turn while running the actual race, I can’t help but want redemption.

In due time though…all I want now is to run. Particularly, I want to do a long run; I’m already ready to rekindle my Saturday morning routine of sweaty miles, but for now…given the whole IT band asshole thing…I’ll settle for baby steps. 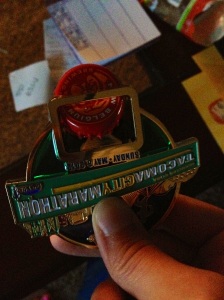 Drinking via your medal’s bottle opener counts for redemption, right? Or rebellion perhaps? TACOMA WHY DO YOU HATE ME?

I’m thankful that I can do the other things I enjoy in terms of exercise, and I’m certain—as always—that once this hiccup goes away it will make running all the more sweeter. Because at this point, the only thing that sounds sweeter than running is a pound or two of strawberry shortcake, which will likely happen once or ten times this week.

Now….Tell me what you did in the sun this weekend! Seattle friends, I know you all got your sun-on for sure. And if not, WHO ARE YOU?! Go away. Also, does anyone have advice for post-race IT band issues? Or just ITBS ailments in general?

6 thoughts on “A Little Sad, but More Happy”